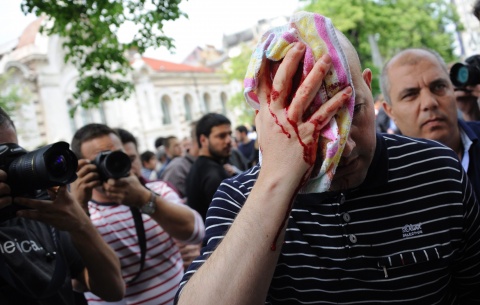 An injured Muslim worshipper holds a towel on his head after suffering a wound in clashes supporters of the Bulgarian ultra-nationalist party Ataka (L) during Friday prayer in front of the Banya Bashi Mosque in Sofia, 20 May. Photo by EPA

The warden of the main mosque in downtown Sofia has suffered a brutal assault at the hands of unidentified attackers just minutes before the start of the morning prayer on Sunday, the Chief Mufti's Office announced.

"Today we witnessed yet another attack against Sofia mosque. This morning, 20 minutes before the morning prayer, the warden of the mosque in Sofia was cruelly beaten. Unknown people have jumped over the fence of the mosque, beaten the keeper, destroyed the security room and burst into the mosque," says the statement.

The man was found by worshippers who came to the mosque for the morning prayer, covered in blood and unconcious, it said. He has been taken to the emergency Pirogov hospital.

"Hate crimes, acts of xenophobia and Islamophobia have risen dramatically in recent months," says the statement of the Chief Mufti's Office.

Bulgaria's Interior Ministry has issued no official information about the incident so far.

The news comes just a month after a Muslim man and five policemen were hurt in clashes between supporters of Bulgaria's ultra-nationalist Ataka party and worshippers outside the Banya Bashi mosque in Sofia on May 20.

The incident was condemned by authorities and human rights groups as an example of a worrying escalation of xenophobia and religious hatred.