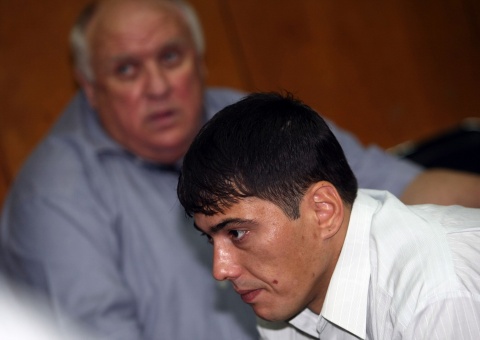 Lazar Kolev (front) got a life sentence without parole for the murder of the Belneyski sisters; his lawyer Marin Markovski is visible in the background. Photo by BGNES

Lazar Kolev, the only suspect in Bulgaria's high-profile "Belneyski" double murder case, has been sentenced to a life imprisonment without parole.

The verdict for the 2006 murder of the Belneyski sisters was issued Friday by a five-judge panel of the Pazardzhik District Court.

Sisters Rositsa (18) and Kristina (15) Belneyski went missing in January 2006, after leaving a disco bar in the town of Pazardzhik. The sisters were found dead at the beginning of February 2006 near the town of Peshtera.

"I can tell the parents of the Belneyski sisters that I am not the murderer of their children. The accusations are false, I am absolutely innocent. I do not know these children and I have not murdered them. I beg the court to declare me not-guilty of this monstrous crime. I want to be acquitted and set free", Lazar Kolev told the court in his defense on Thursday.

Also Thursday, one of the defenders of Kolev, prominent attorney Marin Markovski , said that there was no direct evidence about how the murder had happened.

Markovski repeated the conclusions of a medical expert that the two girls had most probably died on January 31, 2006, which automatically makes Kolev innocent because he has cast-iron alibi for that day

Markovski also reiterated the uncertainty among experts about the time, the place and the mechanism of the crime and drew attention to the hypothesis that a road accident may have caused the deaths.

Regarding the DNA analysis, Markovski raised a question mark over the fact that Ivan Ivanov, an expert from the Bulgarian National Institute of Criminology and Forensic Science, had failed to get a DNA sample in 2006, only to succeed in doing this in 2008, without keeping the diagrams of the analysis.

The Belneyski double murder case is expected to be closed by the Pazardzhik District Court Friday and is most likely to be referred to a superior court level.