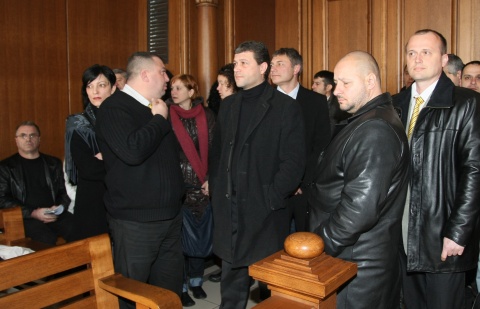 The five defedants are picture here in court. Photo by BGNES

The Supreme Cassation Court (VKS) said there were a number of irregularities committed by the magistrates during the trial to the detriment of the defendants.

The Supreme Cassation Court revoked at the beginning of last year the jail sentence and sent the trial back to the Military Appellate Court, which reduced it in half.

VKS decided that Chorata had died from positional asphyxiation not from a head trauma and a rupture of the artery.

According to the latest medical expertise, Chorata's death was caused by asphyxiation and was further facilitated by his health condition and drug abuse.

Another violation, according to VKS, is that the Appellate Court failed to probe if the policemen had violated the Interior Ministry rules of making arrests and the force they used.

Angel Dimitrov aka Chorata was allegedly killed in November of 2005 by the Blagoevgrad police during a law enforcement operation entitled "Respect."

Dimitrov's death was first declared the result of a heart attack but the first expertise showed that he had passed away due to blows to the head. Chorata was a close associate of the alleged mobster Vasil Gorchev, who was publicly executed in January of 2005.

The sentences triggered mass protest rallies of policemen and citizens in the summer of 2009 in the capital Sofia and in Blagoevgrad. Interior Minister, Tsvetan Tsvetanov, has also voiced support for the accused police officers.