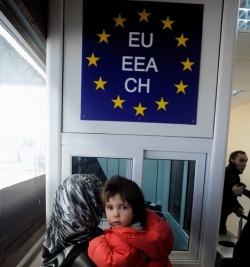 A woman with a child gets her passport checked at Kapitan Andreevo border crossing point between Bulgaria and Turkey, Feb 2011. EPA/BGNES

Bulgaria and Romania will be kept out of the Schengen Area for an unknown period of time in spite of meeting the entry criteria, according to a draft declarations of the EU Council of Ministers of home affairs.

On Thursday, EU interior ministers meeting in Luxembourg are set to acknowledge that Bulgaria and Romania's border controls have risen up to meet Schengen standards, but they will not set a date for their entry into the system, DPA reported citing an unnamed diplomat who is reported to have cited the draft declaration in question.

The report comes just hours after the European Parliament gave almost unanimously its green light for Bulgaria and Romania to join the Schengen border check-free area earlier on Wednesday with a non-binding report.

The European Parliament urged EU governments not to hold Bulgaria and Romania "hostages of populist discourse," in the words of Portuguese conservative Carlos Coelho.

EU Ministers "will return to the question as soon as possible and at the latest in September 2011, with a view to take a decision," the diplomat said, reading from the draft EU declaration.

"It is not really a blank check," he noted, indicating that several countries - Germany, France, the Netherlands, Sweden, Finland and Belgium - wanted to see first an EU annual report on Bulgaria and Romania's crime-fighting efforts, due in July.

"If the report confirms positive developments ... member states will be more favourable towards starting a process leading to the lifting of internal borders," the diplomat said.

DPA also cites another anonymous EU source as saying that even if the political green-light is given in September, Bulgaria and Romania's Schengen entry was not likely to be completed before "the spring of 2012."

Bulgaria and Romania have failed to join the Schengen Agreement by the original deadline of March 2011 because of some Bulgarian border control issues.

More importantly, however, Bulgaria and Romania's Schengen entry has been facing political opposition by key EU Member States such as France, Germany, and the Netherlands, whose governments have demanded that the Balkan states' accession to the border-free zone be made conditional on their post-EU accession monitoring, the so-called Cooperation and Verification Mechanism - EC reports issued each July on problem areas such as organized crime and judicial reform, which are technically unrelated to the Schengen criteria.

It is still unclear how much the approval of the European Parliament will help speed up the Schengen accession of Bulgaria and Romania because France, Germany, and several other EU member states continue to pose political opposition, insisting on the importance of the CVM report.

Recent reports in international media such as the Financial Times have indicated that Bulgaria and Romania's Schengen entry might be delayed not by months but "by years."

The Schengen border-free zone currently encompasses 22 EU countries - Ireland, Britain and Cyprus are the other EU members outside it - as well as Norway, Iceland and Switzerland. Liechtenstein is expected to join before the end of the year.