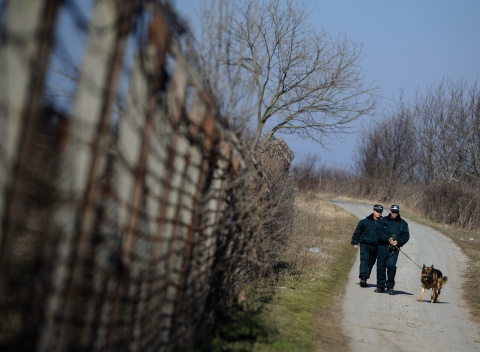 Bulgarian border policemen with a dog patrol along the wire fence near Kapitan Andreevo border crossing point between Bulgaria and Turkey some 300km from Sofia, 11 February 2011. Photo by EPA/BGNES

The European Parliament has given almost unanimously its green light for Bulgaria and Romania to join the Schengen border check-free area.

The two countries have met the entry conditions, based on Commission progress reports, the MEPs said on Wednesday, but added that Parliament should be kept informed of additional measures taken in the Bulgaria-Turkey-Greece area to cope with a possible surge in migration pressure.

The parliament's opinion was adopted with 487 votes in favor, 77 against and 29 abstentions. It will now be sent to EU home affairs ministers' meeting on Thursday in Luxembourg.

After considering progress reports on the two Member States and the findings of expert follow-up teams, MEPs concluded that although some remaining issues will require regular reporting and further attention in the future, they do not constitute an obstacle to full Schengen membership for Bulgaria and Romania.

"We are in a position to welcome Bulgaria and Romania into the Schengen area and I hope that the Council will adopt the same position as soon as they receive our positive opinion. (...) Their citizens should be regarded as fully European citizens, and should not be hostages of populist discourse", said rapporteur Carlos Coelho.

"The free circulation of people is one of the major achievements of the EU, and Schengen is one of the great pillars of the EU. This is the reason why we are one of those who believe that the Schengen area shouldn't be weakened in any way. On the contrary, it should be preserved and strengthened", said Carlos Coelho MEP.

He continued: "Although there are some outstanding issues that will require a follow-up at some point in the future, they do not constitute an obstacle to full membership of Bulgaria and Romania of the Schengen area."

The abolishment of the internal border checks demand a high level of mutual trust between Member States. For this reason, it is necessary to have a quick and adequate exchange of information through the SIS (Schengen Information System), good police cooperation and efficient controls at external borders. The security of the Schengen area depends on the rigour and efficiency of each Member State at their controls at external borders.

"Taking into account the results of the evaluation reports and the necessary follow-ups carried out by the expert teams, both Romania and Bulgaria have shown to be sufficiently prepared to apply all Schengen criteria, fulfilling all the necessary requirements to become full members of the Schengen area."

"Europe is thus in a position to welcome Bulgaria and Romania into the Schengen area. I hope that the Council will adopt the same position and will take note of our positive opinion on this matter", concluded Carlos Coelho.

"Schengen is one of the biggest achievements of the EU. We must not destroy it with rash decisions. The Schengen system is providing the highest standards of border management. Romania and Bulgaria are meeting these standards today - hence, we must not delay their integration. I call on the Council to follow the recommendations of the vote expressed today by the large majority of the European Parliament", said EP President Jerzy Buzek.

Bulgaria and Romania have failed to join the Schengen Agreement by the original deadline of March 2011 because of some Bulgarian border control issues.

More importantly, however, Bulgaria and Romania's Schengen entry has been facing political opposition by key EU Member States such as France, Germany, and the Netherlands, whose governments have demanded that the Balkan states' accession to the border-free zone be made conditional on their post-EU accession monitoring, the so-called Cooperation and Verification Mechanism - EC reports issued each July on problem areas such as organized crime and judicial reform, which are technically unrelated to the Schengen criteria.

It is still unclear how much the approval of the European Parliament will help speed up the Schengen accession of Bulgaria and Romania because France, Germany, and several other EU member states continue to pose political opposition, insisting on the importance of the CVM report.

Recent reports in international media such as the Financial Times have indicated that Bulgaria and Romania's Schengen entry might be delayed not by months but "by years."