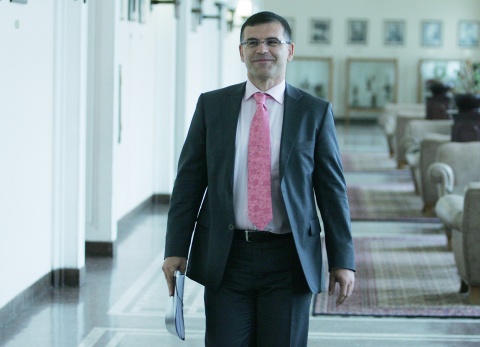 Bulgarian Deputy Prime Minister and Finance Minister Simeon Djankov has admitted that a number of fuel companies are undergoing inspections. Photo by BGNES.

The Bulgarian Customs Agency is conducting inspections at a number of companies in the fuel sector, including Lukoil, the biggest player on the market, according to Deputy Prime Minister and Finance Minister Simeon Djankov.

Dyankov's comment for the morning broadcast of bTV came in response to Customs Agency head Vanyo Tanov, who had said two days earlier that a major fuel company was being checked. Upon revealing that, however, Tanov refused to confirm or reject whether the company in question was Lukoil. Apart from that, the Chairman of Bulgaria`s Comission on Protection of Competition (CPC) Petko Nikolov stated Tuesday that there was no direct evidence of abuse of dominant position on the part of Lukoil.

During Wednesday`s interview, the Finance Minister refused to reveal the concrete reason for conducting the probe, confirming that fictive fuel import was taking place in Bulgaria. In his words, the tax evasion scheme involves returning the fuel to Bulgaria through the Varna and Burgas ports or through a terrestrial border.

Dyankov further informed that Prime Minister Borisov had not been notified of the probe at Lukoil "because it is not part of his job. It is the job of the customs authorities to tell me if something of that kind is going on", he insisted.

Bulgaria's Deputy Prime Minister flatly denied that he had received any phone calls about the inspection at the fuel company headed by Valentin Zlatev, a notoriously close friend of Borisov.

Djankov specified that the ongoing checks were scheduled for completion by end-July, "unless they voluntarily admit that they have bigger revenues, like when we installed fiscal cash registers, which brought a substantial portion of filling stations' turnovers into the light".