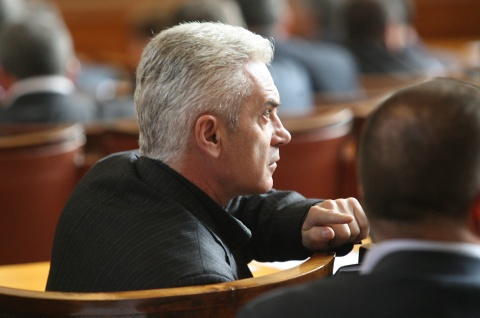 Volen Siderov, leader of nationalist party Ataka, has been refused the position of Chairman of the Parliamentary Anti-corruption Committee. Photo by BGNES.

The proposal to appoint Volen Siderov, leader of the nationalist Ataka party, as Chairman of the Parliamentary Anti-Corruption Committee, was voted down Wednesday.

Siderov's bid received 9 votes in favor, 93 votes against, and 43 abstentions.

The vote was held at Ataka's suggestion to remove the current chairman of the commission, Valentin Nikolov, who left the parliamentary group of Ataka several days ago, together with Ognyan Peychev and Kiril Gumnerov.

At the beginning of Wednesday's sitting, Kiril Gumnerov insisted that the discussion on the proposal be postponed because the anti-corruption watchdog would soon have to decide on a tip-off against Siderov.

According to the former Ataka MP, the signal involves promissory notes worth EUR 150 000 which members of the nationalist party had allegedly been forced to sign.

Valentin Nikolov, current chairman of the anti-corruption authority, said the tip-off against Siderov would be filed to the Prosecutor's Office on Wednesday.

On Thursday, the three renegade Ataka MPs are to give a press conference to shed light on the scandal with the promissory notes.

Condemning Siderov's nomination, Georgi Pirinski, an MP from the Bulgarian Socialist Party (BSP), reminded of the May 20 provocation staged by Ataka, stressing that the party was dangerous for the country because of its abnormally aggressive and anti-constitutional behavior through which it distanced itself from Bulgaria's democratic society.

Infuriated by the negative vote, MPs from Ataka left the plenary hall as a sign of protest.