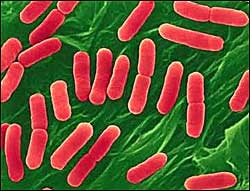 A slight fall in the rate of newly reported infections from the dangerous E. coli bacteria has been registered in Germany.

"There is much to suggest that we have put the worst behind us," said Daniel Bahr, the federal health minister, as quoted Wednesday by The New York Times. The source of the outbreak remains a mystery, though.

More than 2300 confirmed and suspected cases of E. coli infection have been reported across Germany since early May, about 640 of them involving a potentially lethal kidney and nerve system complication.

A total of 23 people have died as a result of the infections so far, 22 in Germany and 1 in Sweden.

Emergency talks among EU Agriculture ministers are to be held later on Wednesday over the E.Coli outbreak.

One of the key topics on the agenda of the forum will be options for reimbursing vegetable producers in the EU for the inaccurate warnings that the outbreak might be linked to Spanish organic cucumbers.