Bulgaria, Romania to Wait for Schengen till after September 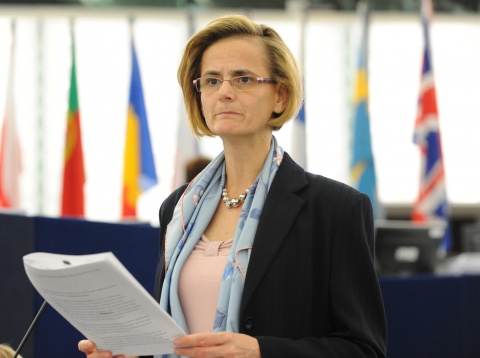 Hungarian Secretary of State for EU Affairs Eniko Gyori at an earlier showing at the European Parliament. Photo by EPA/BGNES

The process of Schengen entry of Bulgaria and Romania will likely continue in September, said Hungarian EU Presidency representative Eniko Gyori in the European Parliament.

Tuesday the EP holds plenary debate on the report on the Schengen progress of the two countries by Portugese EPP MEP Carlos Coelho.

In his speech, the rapporteur praised the two countries for fulfilling all criteria for Schengen accession and called for an imminent entry, which according to him would guarantee the security of all residents of the free movement area.

"The citizens of Bulgaria and Romania must be able to enjoy the same rights as the other citizens of the European Union," stated Coelho.

The Tuesday debate at the EP was heated, with most MEPs speaking out in favor of Bulgaria and Romania's Schengen bid and arguing for level-headedness and no double criteria in introducing additional political requirements - something that member states such as France and Germany have already done.

Opposition to the newcomers' entry was voiced from MEPs in the nationalist and eurosceptic Europe of Freedom and Democracy group, arguing it would increase transborder crime.

Other MEPs dismissed that as extremist rhetoric and called for a swift acceptance of Bulgaria and Romania.

In her speach, Gyori, who is Hungary's Minister of Foreign and EU Affairs, stated that given the present situation the process will most probably continue in September.

"The Hungarian Presidency is looking forward to a positive assessment on the part of the European Parliament and the EU Council, and are working hard to alleviate the misgivings of certain member states," said Gyori.

She stated that Bulgaria and Romania meet the technical criteria for Schengen entry and argued that no further political criteria ought to be introduced for the two countries.

A plenary vote on Coelho's report is scheduled at the European Parliament Wednesday.