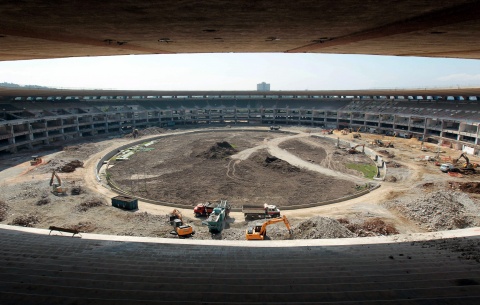 General view of the construction site of the Maracana stadium in Rio de Janeiro, Brazil, 05 May 2011. EPA/BGNES

Bulgaria's national football team got lucky as it barely made it into Pot 3 in the UEFA draw for the World Cup 2014 qualifying groups.

The draw for the European qualifications for the world cup in Brazil is scheduled for July 30, 2011, while on Monday UEFA announced the distribution of the European national teams in six pots, meaning that each of the qualifying groups will have one participant from each pot, and the teams that are placed in one and the same pot cannot face each other in qualifying groups.

Bulgaria were placed in Pot 3 together with Turkey, the Czech Republic, Israel, Ireland, Ukraine, Belgium, Romania, and Bosnia and Herzegovina.

The Pot placement is determined by the FIFA ranking of the national teams where Bulgaria are 47th at the moment. Bulgaria barely made it into Pot 3 as the next team in line, Lithuania, which is the first in Pot 4, is ranked 48th by FIFA with only 15 points fewer than Bulgaria.

Nine teams – the first in each group and the best second – will qualify directly for the World Cup in Brazil in 2014 from Europe, while the other eight second teams will be paired against each other in playoff matches, with only four of them making it to the World Cup.