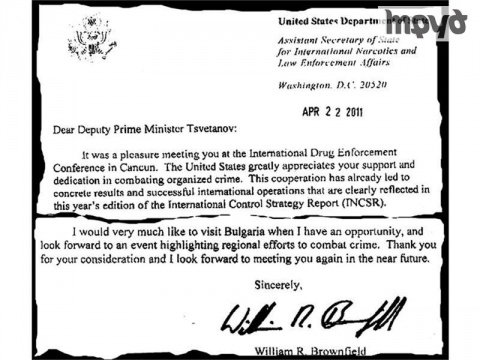 The letter, sent to Interior Minister, Tsvetan Tsvetanov, by William Brownfield, US Assistant Secretary of State. Photo by Trud daily

The successful international operations, realized through cooperation between Bulgaria and the US, are clearly reflected in this year's edition of the International Narcotics Control Strategy Report (INCSR).

The statement comes from a thank you letter, sent to Interior Minister, Tsvetan Tsvetanov, by William Brownfield, US Assistant Secretary of State.

The letter was written in connection with the April meeting between the two in Cancun, Mexico.

In the letter, Brownfield expresses hopes of continuous future cooperation in neutralizing large international crime groups and of stabilization of Bulgaria's court system. He wishes success in the effort to sentence crime bosses and to introduce confiscation of assets, even before a court verdict, acquired through criminal activity, pointing out in the US the latter is an important tool in the long-running fight against organized crime.

The US Assistant Secretary of State assures Tsvetanov that Bulgaria is to receive help in the judicial system reform, including sending Bulgarian legal and crime experts for training in Budapest.