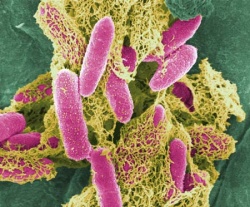 A restaurant in Luebeck, Germany, is allegedly being investigated as a possible starting point of the ongoing deadly E. coli outbreak in Europe.

The information was published by the Luebecker Nachrichten regional daily, which cited anonymous sources. Investigators from the Robert Koch Institute and the Federal Institute for Risk Assessment arrived in Luebeck yesterday, the newspaper said.

Seventeen people fell ill in mid-May after eating at the restaurant in the northern coastal city, according to the report.

Other papers say experts are investigating whether some people caught the disease at a festival in the northern port of Hamburg in May, USA Today points out.

Scientific analysis and lab tests have failed to show that contaminated vegetables are behind the 's deadly E. coli outbreak, which has  killed at least 18 people so far, the EU's Reference Laboratory for E. coli in Rome announced earlier Friday.