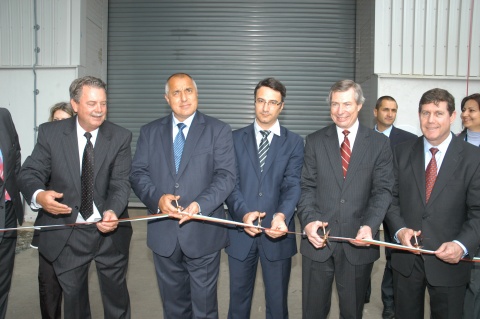 AES Galabovo, a massive investment of USD 1.3 B which is an upgrade of the former state-owned Maritsa East 1 TPP, with a capacity of 670 MW will provide 9% of Bulgaria's electricity, using local lignite coal deposits.

During the ceremony in the southern town of Galabovo, Bulgarian PM Borisov thanked the government, the municipality, and the district administration for their joint efforts in helping realizing the large-scale American investment

"AES Galabovo is expected to solidify Bulgaria's energy sector to increase the country's energy independence. Bulgaria is becoming a better place to invest in the years to come," Borisov said.

In turn, US Ambassador to Bulgaria James Warlick stated that in 2011 the USA will be foreign investor No. 1 in Bulgaria as it was in 2010.

AES CEO and President Paul Hanrahan promised new investments in Bulgaria, reminding that AES is also investing in a wind power park near Kavarna, in addition to the Galabovo TPP.

Bulgaria's Minister of Economy, Energy, and Tourism Traicho Traikov boasted that he is the first energy minister of Bulgaria in the past 30 years to open a new thermal power plant.

According to Environment Minister Nona Karadzhova, AES Galabovo is the only thermal power plant in Bulgaria that meets absolutely every future EU environmental requirement.

AES Galabovo TPP is the largest greenfield investment in Bulgaria after the end of the communist regime in 1989. Its construction was started on June 6, 2006. It now provides directly 360 jobs, and creating indirectly employment for 2 400 more people.

The funding for AES Galabovo was provided through a consortium of 29 international banks including the European Bank for Reconstruction and Development, BNP ING, and Credit Agricole CIB.

AES Galabovo will be buying about 30% of the produce of the Bulgarian state Maritsa East Mines; the produced electricity will be sold Bulgaria's National Electric Company NEK under a 15-year contract.

Initially the first two units of the TPP will work at 70% of their capacity, while full capacity will be reached at the end of the year. The price of the electric power will be the highest so far for energy produced by coal from the local Maritsa Iztok (Maritsa East) mine.

Unit 1 of AES Galabovo was supposed to be launched in October 2010, and Unit 2 - a month later. However, problems with a turbine delivered by French company Alstom Power delayed the launch, and led AES to terminate it contact with Alstom with their dispute now being tackled in an arbitration court in London.

Meanwhile, the expenditures for including the additional production capacities of the new TPP were calculated in the electricity prices in Bulgaria by the National Electric Company NEK, which increased them by 3% for the end consumer in the last eleven months; on the other hand, the delay caused AES to pay compensations to NEK.

The State Commission for Energy and Water Regulation, DKEVR, has promised that this additional income of NEK will be taken into account when determining the new electricity prices as of July 1, 2011, in order to compensate the end consumers.