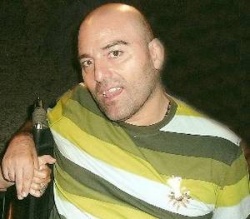 Italian uclear physicist Fulvio Frisone is disabled, suffering from spastic dystonic tetraparesis that forced him to a wheelchair.

He visited Sofia in April 2010, met Bulgarian physicists at the Institute of Nuclear Research of the Academy of Sciences and Bulgarian students.

I am interested in theoretical research which concerns the mechanism that tends to lower the barrier of Coulomb repulsion, as well as the metal matrix in the presence of defects, both local and extended.

In this summary, I wish to illustrate a topic concerning the controversial phenomenon known as cold fusion. I'm working out a complete theory of the process of interaction of deuterium gas in a lattice of palladium, in which the key point is the existence of micro-crack and micro-explosions, in the absence of radioactive nuclides, ie, clean energy as a result, within the deuterated lattices, considering particularly the quantum theory.

That said, I am waiting now for the start of the second phase of tests. The difficulty consists in creating the synergy between the theory and the proper experiment which could work at any place and time. Until now, theory and experiment do not go hand in hand, so there is no reproducibility, so Cold Fusion is not recognized yet as an official science.

In addition, the theoretical analysis on the process of cold fusion indicates high values of the probability of fusion between deuterons within a micro-crack at room temperature and with impure metals.

The first theoretical enigma I faced was the necessity of overcoming the Coulomb barrier between two deuterons (deuterium nuclei). The main point of my argumentation is: since these fusion reactions occurring within the palladium lattice, is it possible that the lattice vibrations could facilitate the approaching of two positive charges? The answer is yes, but it is better to specify.

First of all, as explained initially in one three-dimensional theory, published in 1998 in the scientific journal "Il Nuovo Cimento", there are many ways for the deuterium to get inside the metal lattice.

Also, according to the theory of Prof. G. Preparata, the first phase, known as ?, is the most obvious, but there are three phases in which the deuterium gas can be absorbed by the palladium. The gas is absorbed in a disordered state, without a precise configuration. Then, with the gradual increase of the share of absorbed gas, it stabilizes its configuration in octahedral structures around the ion lattice.

In practice, most of these scientists charge the deuterium in the palladium and after the report of the load exceeds the factor 0.6 nearly, they observe a low background of protons, a clear sign that a nuclear reaction took place. However, this background is so scarce that some scientists assert it can be explained as due to the effect of cosmic rays.

According to the theoretical model, the product of the nuclear reaction d + d (deuterium + deuterium), within the lattice, is most likely helium 4 rather than the usual protons and neutrons. This model has been modified by me for a topic which has been treated during the last International Congress held in Yokohama (Japan) in 2007. The problem of reproducibility is the point that leads many fellow scientists to overlook this phenomenon.

However things are changing now, since MIT has taken the matter up. I suppose that in a short time, after observing this aspect of the non-linear phenomenology, the cold fusion or rather the phenomenon of LERN will become a universally recognized scientific achievement.

When this happens a new way of hope for theoretical physics opens. In fact, thanks to cold fusion, we could have unlimited energy, at low price and, most of all, environmentally friendly (in fact the only reaction's product is helium-4!). Obviously this resource, if properly used, could allow a quantum leap in this world so unfair and so declining.

Unfair, because the oil monopoly owned by some rich countries, creates continuous wars and social injustice to the limit of acceptance. In decline, because the entropy of the system environment is so increased that, unless there is an immediate remedy, we will witnessing a climatic upheaval worthy of the best apocalyptic verses of the Old Testament.

In conclusion, I would like to give a message of hope because I'm sure that, despite the dark times and the fears that this new millennium feeds, man's path is always directed towards the collective good. I mean to help to open the door to this new wave of progress, perhaps due of being able to control the phenomenon of cold fusion.

I'm also studying a cancer model for the same reason. I wanted to do a theoretical physical-medical study with three-dimensional character, based on the laws of Quantum Chromo-Dynamics and I would like to apply the non-abelian principles to a new technique, not traumatic and made only by colors, with the intent to show that using different frequencies of light, will be possible to operate, similarly to the traditional system, in a system of perturbations where the photons interact with the components of the skin, penetrating within the layers and going to hit the same point or area of the organ that has a more or less severe pathology.

Therefore I consider any given coordinate associating it to a yin or yang on which I run a stream of three different colors, different in both frequency and wavelength - Beam Light Therapy (BLT). The system emitting radiation modulates the frequency of using different color slides.