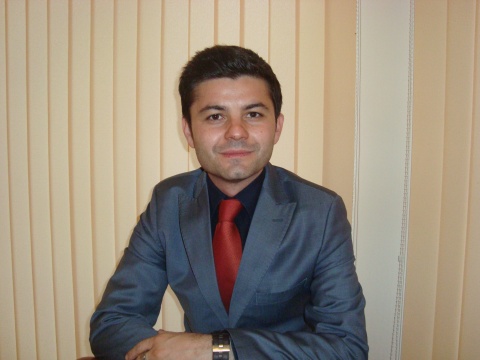 Interview with Giuseppe De Francesko, Manager for Bulgaria of Rigoni di Asiago and Honorary Consul of Italy in Plovdvid, for the "International Survey: Bulgaria-Italy" of Novinite.com (Sofia News Agency).

Giuseppe De Francesco, 35 from Sicily, earned a degree in Political Science from the University of Perugia, Italy. After different work experiences abroad and completing his Master's, Giuseppe joined Rigoni di Asiago in 2004 as Manager for Bulgaria. Since then his responsibilities have increased to Manager of Ecoterra OOD and Ecovita OOD, the two companies belonging to the Rigoni group in the Balkans. In 2010 De Francesco was invited to assume the prestigious role of Honorary Consul for Italy in Plovdiv.

Dr. De Francesco, would you tell us about Rigoni di Asiago in Bulgaria?

With pleasure. Rigoni di Asiago is a group of Italian agro-food businesses in the organic farming sector. It started with the production and commerce of honey run by "Apicoltura Rigoni", as it was called at that time, which developed the successful brands Fiordifrutta, the jam which only contains natural sugar from fruit and is sweetened with Rigoni's own apple-sugar; Nocciolata, the chocolate and hazelnut cream spread, the apple-sugar, DolceD?, and the fruit dessert, Fruttosa.

Over the past 20 years, the present Rigoni generation Andrea, Antonio and Luigi and their cousin Mario, have turned the company into the industrial and modern activity that it is today.  Convinced of their choice of going organic, Rigoni di Asiago opted for exclusively organic cultivation and processing methods, respecting the environment and free of chemical pollutants. The results achieved have been extremely important, so much so that now the entire RdA product range is distributed to all EU countries, the USA, Japan, Brazil and, more recently, the United Arab Emirates.

To confirm this new dimension, which combines tradition with strong industrialization and competitiveness, in 2006 Fiordifrutta ranked first in economic value on the Italian fruit spread market and today is the only organic foods company to be a market leader. Rigoni di Asiago now has a 50 million euro turnover with constant client success growth.

When did the business adventure  in Bulgaria start and how has it developed since then?

The first contact with Bulgaria goes back to 1993 with the purchase of local honey.  In 1995 the first joint-venture company was created, Neri & Asiago, to run the certified organic wild berry picking.  In 2001, Ecoterra and Ecovita were created.

Ecoterra runs the organic fruit farm which spreads over 1000 hectares and employs several thousand work-hands in the Pazardzhik and Berkovica regions. The main crop is strawberries, followed by raspberries, hazelnuts and blackcurrants. More recently, a large nursery has been added to satisfy both the company  and  market requirements.

Ecovita, the sister company belonging to the group, runs the processing of cultivated and wild fruit, employing 50 work-hands from May to September.

In 2004 a modern selection and deep-freezing plant was opened in Pazardzhik; following investments of 4 million euro in 2010, production capacity has been increased to over 3,000 tons/year of frozen fruit and puree. A further financial commitment is planned this year to boost the selection lines with optical and laser sorters and to increase finished product storage capacity.

All the cultivated and frozen fruit in Bulgaria is used for making Rigoni di Asiago products which enables the company to certify the raw material origins, control and then guarantee the entire supply chain.

Why do you think Rigoni di Asiago chose to invest so much in Bulgaria?

We need to identify two sets of factors: on one side we have Bulgaria's economic and social-political situation whilst on the other, and of no lesser importance, we must consider those more closely connected to RdA's core-business – organic faming.

Regarding the general context, doubtlessly Bulgaria has offered and continues to offer several competitive advantages for anyone deciding to create a business. At random, here are a few: Bulgaria's low corporate tax, the possibility to create a company quickly and with limited outlay; very reasonable production costs. Not only: the political and macro-economic scenes are both stable and qualified staff are available.

The Italian institutions – the Embassy, ICE, Confindustria and Unicredit all actively provide assistance.  Not to mention access to EU funds of over 3 billion euros allocated for agriculture over the 7-year period 2007-2013. If we take a closer look at the agricultural sector, we can't help but see important elements which

make Bulgaria an attractive prospect, especially for organic farming: firstly the extensive availability of uncultivated farmland with plentiful water resources, a good climate and limited pollution.  To sum it up, you can produce a quality organic product at low cost with the best organoleptic characteristics.

Could you explain what organic farming consists of and what are the main characteristics of the food obtained?

The rules governing organic farming are set forth in European Regulation 834/2007 which covers "environmental practices, biodiversity, sustainability of natural resources".

Therefore, chemical substances such as weed-killers and insecticides are not allowed, nor are genetically modified plants. The battle against parasites and disease has to be fought using substances of vegetable origin, or by preventive actions such as planting resistant crops and following correct cultivation practices, for instance, crop rotation, creation of vegetation barriers, use of manure and natural compost.

Only products grown according to these standards can boast the "Certified Organic" label which has to be guaranteed and certified by the relevant EU authority.  An organic product is, therefore, natural and genuine, obtained exclusively from the interaction of water, the sun and vegetable substances.

And should anyone have any doubts about this, I invite them to our traditional strawberry festival which we hold on our farm every year at the end of May. There you can taste the delicious strawberries that come from nature, in an unpolluted environment respectful of animal and plant life.

Would you tell us what your position is with respect to genetically modified organisms?

GMO supporters claim that food produced in this way costs less and is produced in greater quantities than other foods, thus contributing to resolving the dramatic problem of world hunger. I am definitely in favour of scientific progress and any innovation which can improve human conditions. But I do wonder if GMOs really can satisfy our needs.

First of all, at the moment we know very little about the side effects of GMO foods. Secondly, I think that whilst the problem of cultivation costs is significant, its real importance is out of proportion.  Recent research shows that the cost of raw materials accounts for an average 20% of the final product cost; therefore it is clearly evident that the high prices paid by consumers are mostly caused by market structure, middlemen and distribution.

And lastly, we can't ignore the fact that by growing GMO crops we submit to the system  of patents held by a handful of multinationals, thus paying royalties which are reflected on sales prices and, finally, on consumers.

To conclude, these are the reasons why I strongly believe that it is much better to eat an apple that isn't perfectly formed but tastes of apple, rather than some shiny fruit with an undefined flavour. This also explains why I am a little perplexed by some Bulgarian institutions whose positions are rather unclear regarding GMOs.

What is the current situation in the organic agro-food sector and its related market in Italy and Bulgaria?

Italy is one of the leading countries world-wide in the organic sector, to the extent that they can boast over 1 million hectares of organic cultivation with more than 50,000 certified operators.  The Italian organic product market is worth about 3 billion euro, while in 2010  exports reached about 900 million, making Italy the world's leading exporter of organic products.

Even so, we need to say that the Italian organic sector is still only a niche market worth about 3% of total food spending and compared to about 20% spent in Scandinavian countries or Austria. Despite last year's situation, organic food products went against the trend with growth exceeding 1l%.

Compared to Italy, Bulgaria has a smaller surface area and has accumulated less experience in this sector; organic farming, however, is growing yet is still not drawing on the full potential of this market.

According to data available on the Ministry of Agriculture website, organically cultivated land amounts to just over 13,500 hectares, meaning 0.26% of the overall farm land, compared to 9% in Italy, with approximately 320 certified operators.

The organic product market represents less than 1% of the total and more than 90% of Bulgarian production is exported. Therefore, we can see that Bulgarian consumers aren't particularly interested in organic food and the distribution chains seem to be following this trend without offering incentives to change.

Could you outline Rigoni di Asiago's experience in Bulgaria?

Basically, I'd say there are two distinct phases regarding RdA's experience in Bulgaria.  The first, which we could call 'pioneering', was led by our Italian-Bulgarian Engineer, Iliya Nemski.

During this phase of adapting to a country and analysing the offers received, heavy investments were made in purchasing farm land and constructing Ecovita's first processing plant. Phase 2, over the last 5 years, developed into industrialisation, that is the consolidation and strengthening of its position, leveraging a management team of dedicated and skilled professionals.

During both phases, Rigoni di Asiago has always remained focused on its own industrial objectives, which respect their concept of sustainable development and ethical responsibility.

It has, in fact, preserved the environment and has always worked to guarantee proper working conditions and fair pay for its staff.  In fact, they employ a lot of Roma workers, thus helping to integrate this minority group into the country's social and economic fabric.  Until now the group has invested nearly 15 million euro and created hundreds of jobs.

To conclude, can you tell us what the prospects for development are in the future?

The industrial development plan includes expanding by both acquiring more farm land and opening a new industrial site which will bring significant employment opportunities to the Pazardzhik and Montana provinces.  Unfortunately, I am bound to point out that this strategy is subject to a few fundamental conditions.

Firstly, the Bulgarian Administration has to be more efficient regarding EU funds. Despite the new Government's attempts to improve the situation, a mere 10% of European funds were absorbed in 2010, as announced by Minister Donchev last January, much less than is acceptable.

Secondly, I would invite Bulgarian politicians to resolve the continuous problem of small farm holdings, which make industrial-scale production impossible, all the more so as land plots are difficult to group together.

Finally, I would emphasise the need for precise and transparent laws, with downsizing of all bureaucratic procedures: too often, and I can say this problem affects both foreign and Bulgarian business, the rules of the game, for example applying for financing, are not clear and the formalities prevail over the essence.

If all these obstacles were to be removed I am certain that not only we ourselves, but many other investors would choose Bulgaria and enable the country to experience solid, structural growth and steady development.