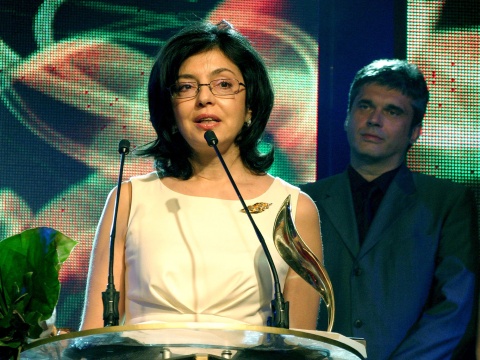 Daughter of renowned Bulgarian musician, Meglena Kuneva married to financier Andrey Prumov, whose family has had a long history of active political participation. They have a son, who has managed to stay out of public limelight despite the hard work of his mother.

A Catholic after her mother.

Graduated in Law from St. Kliment Ochridski Sofia University, 1981 and obtained a Doctor's degree on environment protection issues. She specialized at the Institute of Human Rights, Finland, in 1993, at Georgetown University, USA, in 1995 and 2001 and at the Oxford Center, UK in 1996.

Assistant professor in Civil Law at from St. Kliment Ochridski Sofia University and lecturer in Ecological Law at the New Bulgarian University.

She was editor at the Bulgarian National Radio.

She worked at the Legal Department of the Council of Ministers in the sphere of ecological law, state-owned property, natural resource usage, concessions and agriculture, April 1991 - May 2001.

Expert at the World Bank on the establishment of the eco-fund and the comparative research of Central and East European countries on the evaluation of human impact on the environment, 1995-2001.

In 2001 she worked on the Convention on biological diversity and the Kartagen protocol for the genetically modified forms of life at the Institute of World Resources in Washington, USA.

Kuneva is a partner at Eurolex Bulgaria Ltd., 1998, member of the Legal Team of Simeon II National Movement Coalition for the parliamentary elections in 2001. C

Kuneva was appointed Deputy Minister of Foreign Affairs and Bulgaria's Chief Negotiator with the European Union in August 2001. Elected on May 29, 2002 for minister of European Affairs. She retained her post in the Socialist-led coalition government after the general election in the summer of 2005.

Kuneva was EU Commissioner for Consumer Protection during the first "Barroso" college. She became known for her strong critics of the European banks and the fees they impose on customers, but was also praised for her effectiveness, and particularly for her focus on online protection and revising consumer law.

Upon expiration of her Commissioner's term, Meglena Kuneva was first tipped to be the next head of the Commission's in-house think-tank, the Bureau of European Policy Advisers (BEPA), but was later reported to have been denied the appointment.

Sources in Berlin, close to the German Chancellery and in the European Parliament in Brussels, said that the request of Kuneva was vetoed by Germany, as an expression of political and personal support to new Bulgarian Prime Minister Boyko Borisov.

Bulgaria's Prime Minister Boyko Borisov refused to nominate her for a second term as EU Commissioner because she is member of the party of former Tsar and Prime Minister, Simeon Saxe-Coburg, National Movement for Stability and Prosperity (NMSP), which was part of the previous coalition cabinet.

In April last year Kuneva was appointed a political advisor of Vice President of EC, Siim Kalas. At the end of June the European Commission approved her appointment as a member of the Board of Directors of France's banking group BNP Paribas.

In the middle of September, 2010, she was appointed Chair of the Governing Board of the European Policy Center, an independent, not-for-profit think tank committed to European integration.