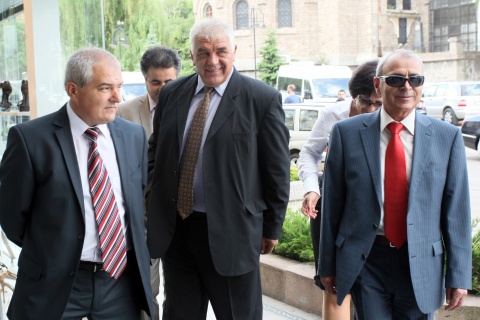 Customs Agency Director Vanyo Tanov (centre) at the opening of an international conference on combating cigarette smuggling on the Balkans. Photo by BGNES

The biggest volumes of smuggled cigarettes seized by the customs authorities come from Greece, with a total of 90% of illegal imports arriving from the EU, announced Customs Agency Director Vanyo Tanov.

Tanov stressed that, since Greece is an EU country, customs officers are not authorized to check vehicles arriving from that destination.

Speaking at an international conference on combating cigarette smuggling in the Balkans, Tanov presented statistics showing that 70% of the smuggled cigarettes come from Greece, 3% come from Turkey, 0.5% from Macedonia and Serbia.

"Over the past few year, EU member states have faced the serious problem of cigarette smuggling from the east. The southeast has turned into a threat for Bulgaria, EU and the Balkans", Tanov asserted, calling for better cooperation amongst customs authorities.

"In 2009 and 2010, smuggling flows came primarily from Moldova, Ukraine and Romania to Bulgaria and third countries. Now the trend has shifted to the south, with the biggest volumes of smuggled cigarettes coming from Romania, Hungary, Poland and the Czech Republic, which are the main victims of this tendency", he concluded.

According to Tanov, a very large portion of the contraband tobacco products travel by sea to North Africa, from where they are distributed to EU countries. In his words, the reason why cigarette traffickers increasingly opt for naval transport is that terrestrial border control is much more stringent.

Tanov further claimed that smuggling exerted a serious negative impact on the national budget. He revealed that close to 30% of the cigarettes consumed in Bulgaria had been illegally imported or produced.

In a separate statement, Finance Minister Simeon Dyankov assigned a 30% share to smuggling.

"In the next four years, we do not expect an increase in excise duty on cigarettes", Dyankov pointed out, predicting that this step will help combat smuggling.

In his words, the 2010 increase in the excise tax on cigarettes was a government measure aimed at reducing inflation. Another reason behind the 2010 excise hike, Dyankov said, was health concerns.

Dyankov cited statistics showing that 2010 had witnessed a 4.3% decrease in the number of smokers, reversing a stable, year-long trend.