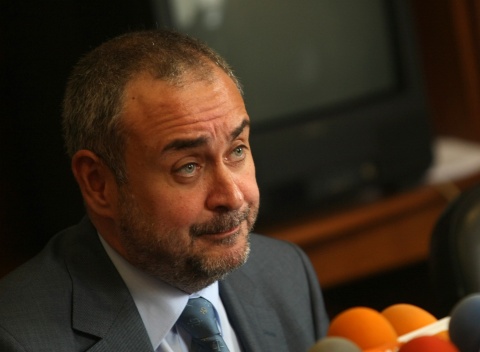 Chief Prosecutor Boris Velchev has said that the latest spate of Wikileaks cables discrediting PM Borisov are no cause for launching an investigation. Photo by BGNES.

The Prosecutor's Office will not self-initiate an investigation over the discrediting information about the Bulgarian Prime Minister contained in the Wikileaks cables of former US Ambassadors to the country, announced Bulgaria`s Chief Prosecutor.

"If we allow an investigation to be opened on mere allegations, can you imagine what country we would be turning into", Velchev declared.

A few days ago, Wikileaks published cables of US Ambassadors John Beyrle (dated 2006) and Nancy McEldowney (dated 2008) claiming that Boyko Borisov was involved in meta-amphetamine trafficking, fuel siphoning schemes and illegal dealings with Lukoil. The leaked documents further cited Borisov as saying that "Bulgarians are not used to taking decisions on their own and need Washington and Brussels to tell the Prime Minister "what should be done"

Addressing another hot topic, Velchev went on to explain that police brutality was a pressing problem. He drew attention to the fact that the number of police brutality cases had gone up since the investigations of police officers were taken over by civil prosecution authorities.

A total of 238 cases against police officers had been opened in 2010, Velchev announced, with 72 of them concerning police brutality. He reiterated the claim that the number of such incidents had been smaller when they were handled by the military prosecution.

The Chief Prosecutor said he would address Parliament about the matter by the end of autumn 2011. He also vowed that a specialized unit within the Supreme Prosecutor's Office of Cassation would be tasked with overseeing pre-trial proceedings against police officers.

In 2008, despite the opposition of then-Chairman of the Sofia Military Appellate Court Veselin Pengezov, lawsuits against police officers were redistributed away from military court structures and into the competence of civil court structures.

The Chief Prosecutor also revealed that it was yet to be seen whether the specialized courts and prosecution units would become operational. He admitted that vacancies in such structures attracted few candidates because of the lack of trust on the part of magistrates.

Velchev also informed that the State Commission on Information Security had not yet presented its statement on the materials in the case against socialist leader Sergey Stanishev. The Commission is to say whether the documents pertaining to the case constitute a state secret. Stanishev was charged with losing seven secret reports- three documents from the State Agency for National Security (DANS), two from Bulgaria's Interior Ministry, one from the Defense Minister, and one from NATO.

Regarding court statistics, Velchev pointed out that a total of 50 000 sentences had been handed in 2010, with 95 000 victims of crimes reported for the period. In Velchev's words, the ratio of acquittals is as low as 3.7%.

Velchev emphasized the marked increase in tax crimes, which had climbed fourfold in comparison to 2007, and the significant growth in cases involving misuse of EU funds. According to him, 2010 has seen a total of 243 guilty sentences over EU funds abuse.