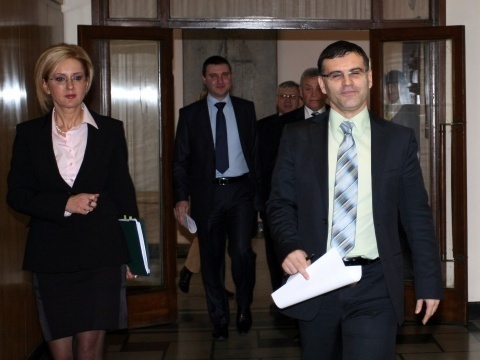 Bulgarian Finance Minister Djankov (right) with his deputies Pencheva (left) and Goranov (back) on their way to present the proposed Financial Stability Pact at the end of February. Photo by BGNES

The Bulgarian parliament will debate on Wednesday the establishment of an ad hoc body to deal with constitutional amendments, proposed by Finance Minister Simeon Djankov.

Upon submitting the draft constitutional amendment on Friday, Finance Minister Djankov said he hoped the Pact could be adopted by the fall of 2011.

The three main pillars of Djankov's Financial Stability Pact to be solidified via constitutional amendments are introducing a limit to allowed budget deficit, restricting the ability of the state to redistribute public funds as a percentage of the GDP, and introducing a qualified majority vote of two-thirds of the votes in Parliament to change Bulgaria's direct taxes.

The plan envisages capping the budget deficit at 2% of GDP product and spending at 40% of GDP.

Djankov's Financial Stability Pact is expected to enter into force as of January 1, 2013, several months before the expiration of the four-year term of the Borisov Cabinet and before the regular parliamentary elections provided that the government serves its full term. This means that the Pact, if approved, will be in force for those ruling Bulgaria after the present Cabinet of Boyko Borisov.

Djankov believes that the proposed measures will "cement" Bulgaria as having one of the strictest fiscal policies in the European Union, and will be supported by both the rightist and the center-leftist opposition.

In order to amend the Bulgarian Constitution, the Borisov government will need to have three-fourths of the MPs, or 180 MPs, to vote in favor of the motion in three different votes.

Ruling party GERB has 117 MPs, and can rely on the support of 18 MPs plus three renegades from the nationalist party Ataka, supposedly 14 MPs from the rightist Blue Coalition – only 9 MPs from the UDF, and several independents, formerly from the conservative party RZS ("Order, Law, Justice").

If the Socialists (BSP) and DPS join forces, with a total of 77 MPs, they could deny Djankov the three-fourth majority that he needs to pass the amendment.

However, even in this scenario, the amendment stands a fair chance of being passed because if the initiative failed to get a three-fourth majority but still musters more than two-thirds of the votes (160), it can then be passed if it gets two-thirds of the MP votes in the next voting that is required to take place no earlier than 2 months and no later than 5 months after the first vote.