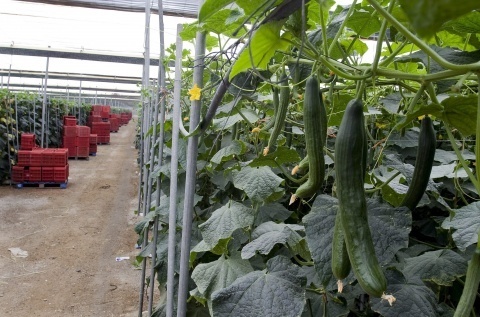 Cucumbers are seen at a plantation in Almeria, southern Spain. Photo by EPA/BGNES

Lab test have shown the cases of the hemolytic uraemic syndrome, caused by the so-called enterohemorrhagic Escherichia coli (EHEC), have not been spread by Spanish cucumbers.

16 people - 15 in Germany and 1 in Sweden have died so far from the syndrome, but its cause remains a mystery.

The tests established that the organic cucumbers have been contaminated with the Escherichia coli bacteria, but not with the deadly EHEC strain, discovered in the intestines of about 1 000 people in Germany and nearby countries, the Bulgarian news agency BTA reports Tuesday, citing DPA.

The German Health Ministry warns people to avoid consuming lettuce, cucumbers and tomatoes until the source of the strand is established.

In addition to the 16 fatalities, there are strong suspicions a 40-year-old Spanish citizen, who recently returned from Germany, is infected. He is listed in the intensive care unit of a Spanish hospital.