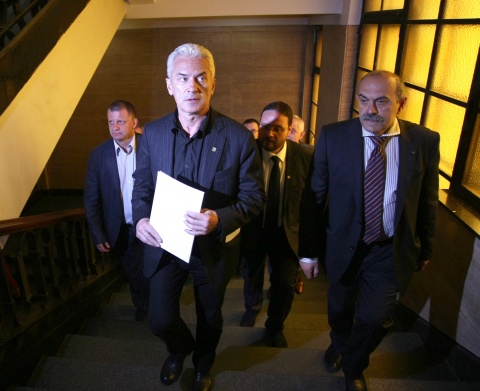 Volen Siderov, leader of far-right party Ataka, appearing in court to give his version of the May 20 clash in front of the Banya Bashi mosque. Photo by BGNES.

On May 20, the far-right party led by Volen Siderov shocked Bulgaria as its rally protesting against the use of loudspeakers by the mosque in downtown Sofia got out of hand, and activists of Ataka assaulted praying Muslims in front of the mosque.

"A breach of the public order is punishable by a fine of BGN 100 to BGN 2500. In this case, the violation is of crucial importance to society, which is why we are will impose the maximum penalty", Veska Georgieva, Director of the Sofia Municipality Inspectorate explained.

In the meantime, the Sofia Regional Prosecutor's Office has requested an expert analysis of the recordings of the clash at the mosque provided by the Interior Ministry and the media. Out of over 35 hearings so far, not a single witness has identified any of the hooligans.

"I have seen the tapes. The cameras show that other people than the detainees have also taken part in the fight", Sofia District Prosecutor Alexander Nalbantov stated.

During the expert analysis of the video material, snapshots will be taken of the faces of the participants in the brawl in order to help identify and track them down.