Oaks Planted in Bulgaria in Honor of Polish Katyn Victims 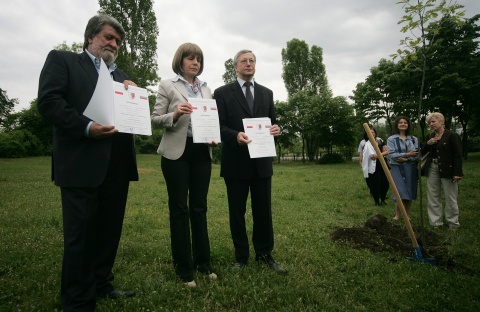 Three oak trees, commemorating the Polish victims of the Katyn massacre in Soviet Russia, were planted Tuesday in the South Park of Bulgaria's capital Sofia.

The Polish Ambassador to Bulgaria, Leszek Hensel, Culture Minister, Vezhdi Rashidov and Mayor of Sofia, Yordanka Fandakova, were among the official guests of the ceremony, titled "Katyn... save from oblivion."

In his address the Polish diplomat reminded of Bulgarian Doctor, Marko Markov, who took part in the work of the international Red Cross commission in 1943, and was later sentenced to death by the People's Tribunal of the Communist regime because he had confirmed the slaughter of 21 857 Polish officers by the Soviet NKVD - best known as the Main Directorate for State Security. Hensel spoke how Markov escaped the dead row by stating he had been forced to sign the protocol.

Razhidov said that there would never be truce without the truth, while Fandakova pointed out the best way to preserve the memory is to have something living and growing. They planted oaks in the memory of Katyn victims connected to Bulgaria through mixed Bulgarian-Polish marriages.

The initiative "Katyn... save from oblivion."began two years ago in Poland, and has been adopted in many countries across the globe. The goal is to plat as many oak trees as the number of those killed near Katyn.