Cooperation in Public Works between Italy and Bulgaria 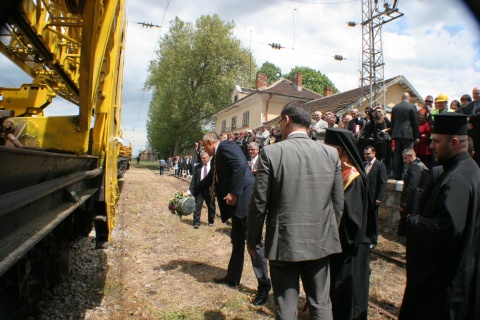 Start of the rehabilitation of the Plovdiv-Burgas railway by the Bulgarian government, a project won by Italian firm GCF. Photo by BGNES

I hope the reader will excuse me if I start such an article by mentioning certain public works carried out in so many places in present Bulgaria by the Romans.

No one in his or her right mind might ignore the Roman Theatre in Plovdiv (to mention the first one coming to one's mind) as one the first examples of co-operation.

But I wish to touch briefly on some more recent cases. For example, not everybody knows that the hydro-electric plant in Pancharevo was built at the end of the XIX th Century by foreign firms availing themselves also of Italian workers.

To come to more recent times, I wish to mention the participation of Italian firms to the construction or roads in Bulgaria after 1989 with EU funding.

But the Italian participation in the energy improvements in Bulgaria includes the Enel re-habilitation of the Maritza Iztok 3 thermo-electric plant (now the most environmental friendly in the Balkans), the flowing water electric plants the Italian firm PVB is building on the river Iskar (and hopefully the river Maritza).

On the transport side, I am proud of the recent awarding of the rehabilitation contract of the Plovdiv-Burgas railway to the Italian firm Generali Costruzioni Ferroviarie, whose start took place on May 11, 2011 at the presence of the Bulgarian Prime Minister. Also, the Italian firm Cooperativa Muratori Cementisti was awarded a few weeks ago the realization of Lot n. 1 of the Maritza Highway.

I am confident that these examples will foster other Italian firms to present their offers for other Bulgarian public works contracts. We have the experience and the know-how to accomplish them with success.