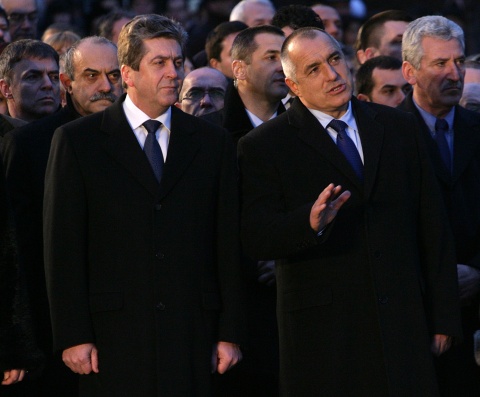 The views of Bulgarians on the work of the cabinet remain unchanged in the last two months, with a prevalence of the negative assessments, according to a poll conducted by the National Center for Study of Public Opinion (NZIOM).

The poll has been conducted among 1 000 Bulgarians around May 20.

The cabinet receives the approval of one third of those polled and of 68% of the supporters of the ruling, center-right Citizens for European Development of Bulgaria, GERB, party.

The supporters of the Bulgarian Socialist Party, BSP, are the most critical towards the cabinet with 80% disapproval rate.

Regarding Ministers from the cabinet, the main trend is for their approval ratings to go down.

The approval ratings of several Ministers, however, went up – 5% for Sports Minister, Svilen Neykov, 4% for Regional Minister, Rosen Plevneliev, and 2% for each Economy and Energy Minister, Traicho Traikov, and Culture Minister, Vezhdi Rashidov.

Plevneliev is the only Minister whose rating is constantly on the rise, having the highest approval rating in the cabinet.

Finance Minister, Simeon Djankov, has the highest disapproval rating in the cabinet - 66%.

The share of Bulgarians, who believe the opposition Bulgarian Socialist Party, BSP, can rule the country better than GERB is up and reaches 13% while the number of those who believe GERB has no political alternative is down by 13%.

Among country and party leaders, President, Georgi Parvanov, has improved his public image and for the first time in the course of the last year, his approval rating surpasses the disapproval – 47% and 38%, respectively.

Prime Minister, Boyko Borisov, lost 6% of his approval rating in the last two months, but 51% still approve of him while 39% disapprove. In the last year, the number of those who approve of Borisov's work is down 14%, but 88% of GERB supporters stand firmly behind their leader.

The Speaker of the Parliament, Tsetska Tsacheva, lost 3% of her approval rating.

71% of Socialists approve of Stanishev.

The leader of the far-right, nationalist Ataka party, Volen Siderov, lost 7% compared to March, even though the poll has been conducted before the bloody clash between Ataka followers, led by Siderov, and Muslims, praying in front of a mosque in the capital Sofia. Siderov, however, enjoys the support of 95% of Ataka voters, making him the most approved of party leader among own followers.

Police, surprisingly, is the most approved of institution with 41% approval, coming mostly from the young and educated and unemployed with positive assessments surpassing the negative ones.

The approval of the army is up 2%.

The Prosecutor's Office and the Court continue to lose grounds – 5% and 4% down, respectively.