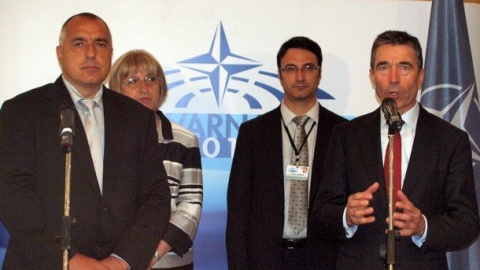 "The crisis in Libya cannot be resolved only by military actions; there is a need to use political tools. The future of Libya belongs to Libyan people and we wish to see a peaceful transition to democracy," Rasmussen pointed out, adding in order to make such operations possible, sufficient financing from NATO member countries is a must.

The Secretary General voiced alarm over the reduction in NATO's military budget, saying he understood the challenge before all governments in times of crisis, and explaining his proposal to achieve security by the most effective use of resources.

Rasmussen gave as an example the partnership with Bulgarian participation in the very expensive C-17 planes project, and stated he wanted to have similar projects in all sectors. He pointed out that few countries in the Alliance slate 2% from their budgets for defense and in order to not lag in the development of modern technologies, member countries must unite in the so-called "intelligent defense."

Regarding the missile defense system in Europe, the NATO Head explained all details would become clear in a year's time.

Rasmussen thanked Bulgaria for its participation in the Afghanistan mission, announcing that the staged transfer of responsibilities to local forces will begin in July and the rule of 7 provinces will be given to local authorities. The process is to conclude by 2014, when Afghanistan would fully take over its own country, but NATO is to continue its assistance through civil and educational programs.

Prime Minister Borisov, who addressed the participants earlier Monday, declared Bulgaria wants its entire territory covered by the missile shield and also focused on the NATO mission in Libya.