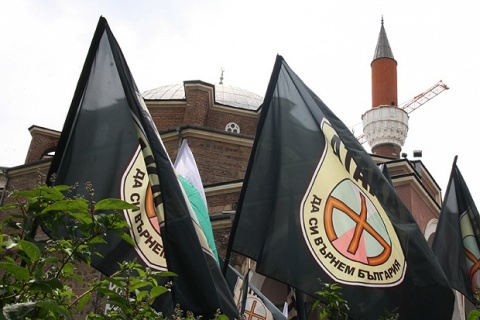 Bulgaria's far-right, nationalist Ataka party has been involved in a number of recent scandals. Photo by Sofia Photo Agency

A club of Bulgaria's far-right, nationalist Ataka party has been vandalized overnight in the "Studentski Grad" (College Town) district of the capital Sofia.

There has been a fire inside the club. The call to the firedepartment, notifying of smoke coming out of the building, was placed at 1:30 am.

There are suspicions of arson and the police are searching the premises and probing the incident. No injuries have been reported.

"I firmly reject speculations this is a political provocation; this is an act of hooligans," Yavor Notev, Ataka Member of the Parliament, is quoted saying by Dnes.bg, explaining he learned about the fire from the media and the police are yet to call him.

According to the politician, the club was first attacked by a stone which broke a window. He says the incident was triggered by a dispute over parking spots.

Ataka made headlines in Bulgaria lately by several scandals involving party supporters and leader, Velen Siderov – barging at US Ambassador, James Warlick at a Sofia restaurant; marring the first ever commemoration of the canonized Batak martyrs, massacred by Ottoman forces; stirring a bloody clash with Muslims in front of a Sofia mosque, and physically attacking an ethnic Turkish politician on air, during a live radio talk show.