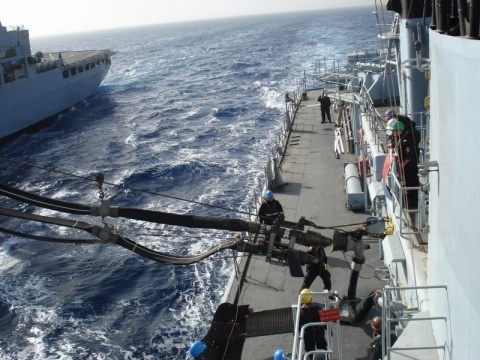 A Bulgarian navy frigate, which set out on April 27 to join NATO's Operation "United Protector" patrolling off Libya's coast to enforce a UN arms embargo, will return on June 5 due to lack of funding.

The Bulgarian government had approved sending the frigate for three months to the Mediterranean Sea to take part in the NATO operation, but there is no funding to extend its mission, according to the defense minister.

"Bulgaria does not have the financial resources to extend the frigate's mission. These are expenditures, which were not planned in advance," Minister Anyu Angelov said at the NATO summit in Varna.

The mission, which is Bulgaria's only military contribution to the NATO efforts against the regime of dictator Muammar Gaddafi, cost the state budget about BGN 1.5 M.

The frigate was manned by 160-member crew who will receive bonuses of EUR 51-53 per day for the duration of the mission.

The length of stay of each ship in the Mediterranean is one month in general before rotation is done.

Two weeks ago the Bulgarian Navy frigate Drazki started its second patrol of the Libyan coast within NATO's United Protector operation to enforce a UN arms embargo after completing a midterm break on Crete.