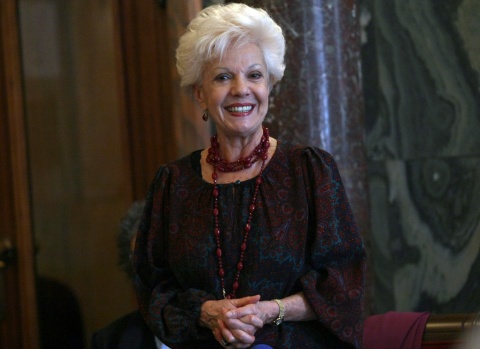 She loves Italy as much as her homeland. She has the talent to "live" on stage thanks to her sovereign musicianship and the charisma of a great actress. She is the Bulgarian prima donna - Raina Kabaivanska.

Your Bulgarian teacher Iliya Yosifov is believed to be the first person who saw your potential and insisted you were born for the stages of Italy's opera houses. When did you realize he has been right?

I am deeply grateful to my first teacher Iliya Yosifov, who was the first to discover the potential of my soprano voice and steered me away from being a mezzo soprano.

Fifty-four years later I am still not convinced that I was predestined to build a career on the world and primarily Italian stages. It all happened naturally, without excessive ambitions, but with lots of spontaneity and enthusiasm on my part.

You made your debut in 1959 in Italy with Puccini's opera "Il Tabarro". Decades later, at the age of 69, your last Tosca set a record, prompting talks of a living legend, a myth. Which is the role to which you think you owe your popularity?

Of course, I owe my popularity to the roles, which have been most frequently staged. Having in mind that I have performed the roles of Tosca and Butterfly at more than 400 performances each, in the biggest and smallest theatres around the world, it is only natural that people identify me with these heroines.

Critics say that the last 50 years have been marked by Callas and Kabaivanska and they often set the two of you side by side. Do you remember when you first heard her voice? How did you manage to swap your scholarship in Moscow with a course in Milan? Why did you choose to head for Italy?

Callas was a true vocal phenomenon, one of those who happen to be born once in two hundred years. The range of my voice is more normal. I heard Callas' voice for the first time while I was a student in Sofia, having no idea who she is.

A friend of mine had a radio and we used to secretly tune in to foreign radio broadcasts, which were banned in the country at that time. One evening we heard the unique voice of this woman, who had mastered and fine-tuned all technical details, whose sensitivity to music had such great depth.

That was a concert from the Martini-Rossi series. I was so faschinated that I decided to go to Italy, where opera singers have this style and manner. It was a real struggle, but in the end I managed to change the destination of my scholarship trip.

The recognition that you received by winning the prestigious contests Viotti and Avanti, as well as the rapturous reviews in the Italian press made you the first successful Bulgarian singer on the other side of the Iron Curtain. In hindsight where do you think did the communist regime inflict its deepest scars?

The lack of freedom in very walk of life proved to be the harshest verdict that the comunist regime delivered on the people. Great artists remained unknown to the world. I was really lucky.

Do you think that being in Italy you had an easier time than other Bulgarian artists abroad since you did not have to oppose openly the regime before 1989?

It was impossible to openly oppose the communist regime. This posed not only huge personal risks, but threatened the lives of the members of the whole family – some people suddenly disappeared, others were prosecuted and put on trial, blackmailed... I personally have received threats many times (though in a very refined manner!).

My family was held hostage. And I was coming back each year to my home country to perform on its stages.

Which side of your character helped you most to achieve such a huge success in Italy?

My musical training and my energetic presence on the scene, the power to "live" on the stage, won the heart of the Italian audience.

Italians can not be captivated solely by the beauty of the sound. They understand the lyrics and value above everything else the cohesion between music and lyrics, in other words the singer-artist.

Which is the role, which affirmed your talent and qualities in the eyes of the Italian public? What makes Italian opera audience different from all the others?

I can't single out one particular role, which has affirmed my reputation in Italy. I have always had a very diverse repertoire, ranging from Gluck, Spontini, Bellini, Donizetti, Verdi and Puccini to Jan??ek, Shostakovich, Poulenc, Britten and Kurt Weill. It was always the title, which first attracted my attention.

Usually I performed roles with big dramatic impact on the audience. The prima donna is the one, who has to touch the heart of the audience, to provoke emotions. This is something Italians are very fond of.

Which is the most memorable performance on stage for you personally?

My farewell with the role of Butterfly on the Arena di Verona will probably remain the most memorable performance on stage for me. As the audience of 200,000 was giving me a long standing ovation, I thought to myself: "May be I have managed to give these people something truly valuable, if I receive in return so much love".

You visit Bulgaria pretty frequently. What do you miss most from your homeland, while in Italy? What binds you to Bulgaria?

I am bonded to Bulgaria by the blood that runs in my veins – my past, memories and friendships are all there. What I miss in Italy is the spontaneity in relationships, which is still a trait of the way Bulgarians communicate with one another.

The lack of great opera talents is a phenomenon of world significance, which is hard to explain. How can Bulgaria and Italy cooperate to come across talented and ambitious young singers?

I would not say that there is a lack of opera talents among today's youth. It is just the selection method that has changed. Today having a great voice is not the most important condition for a singer to be successful.

Proper musical training, the mastery of vocal resources in all registers (a requirement, which in its toughness sometimes is close to the absurd) comes first. Bulgaria and Italy have already managed to throw a bridge as far as their talented singers are concerned. An example of such an exchange is my initiative for master classes at the New Bulgarian University, Sofia.

In a recent public campaign to find Bulgaria's top events of the 20th century, the "Miracle of Bulgarian Opera" was voted number one. Did Bulgaria's opera manage to become one of the top events in Italy as well?

Bulgaria's opera is a true miracle and it was brought into existence thanks to many talented artists. Art knows no borders and the nationality has no significant importance.

An artist can build an international career if they are endowed with great talent and strength. In the era of globalization that we live in the artist's nationality bears no weight, it is the qualities that matter.

When you celebrated the 50th anniversary of your career, an exhibition featuring your landmark appearances on stage opened in Sofia, which ran under the title "Raina Kabaivanska - the divine". Where do you feel more divine – in Bulgaria or in Italy?

In Italy – there is no doubt about that. This is a country, where the creation of myths and competition in all spheres of life is a national trait. Naturally the prima donna turns "divine".

Let's not forget that Callas turned into a myth and a living legend first in Italy and it was only later that her talent was discovered by the whole world. Bulgaria's traditions in the opera art are much younger, not as deeply rooted as the Italian bel canto.

The opera in Bulgaria has never been a culture for the masses as it is in Italy. I personally do not consider myself to be "divine" in any way, but for the public in Italy I obviously am.