No Evidence of Contaminated Cucumbers in Bulgaria - Watchdog 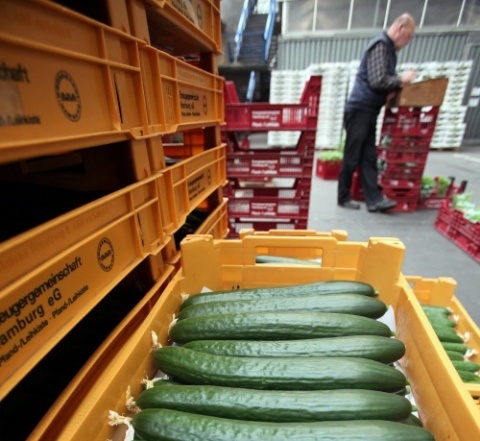 Cucumbers from regional farmers are sold at the vegetable market in Hamburg, Germany, 27 May 2011. Photo by EPA/BGNES

There is no indication that there is here any of the contaminated cucumbers that caused a deadly E Coli outbreak in northern European countries, Bulgarian authorities have announced.

"The batches of organic cucumbers from the two provinces of Spain, Alneria and Malaga, which have been identified as one of the sources for the outbreak, never reached Bulgaria's market," Anton Velichkov, Deputy Executive Director of the country's Food Safety Authority told Darik Radio on Friday afternoon.

He assured that local authorities will continue to monitor the situation closely to identify if any cases appear.

Bulgaria's Food Safety Authority is in the process of contacting all retailers, suppliers and caterers in relation to an outbreak of E Coli in Germany to ensure there is no contaminated product here.

The probe will cover all fresh vegetables, imported from European Union countries.

More than 200 people have been affected by the outbreak of E Coli in Germany and four people have died. Cases have also been reported in Sweden, Denmark, Britain, and the Netherlands.

German health officials said Thursday that cucumbers imported from Spain was one source of the recent deadly E. coli outbreak in northern states.

The Hamburg Institute for Hygiene and the Environment (HU) found that four cucumbers in a local market were contaminated by Enterohaemorrhagic E. coli (EHEC), and three of them were imported from two separate Spanish suppliers, Hamburg state health authorities said.

The origin of the fourth cucumber was still under investigation, officials added.