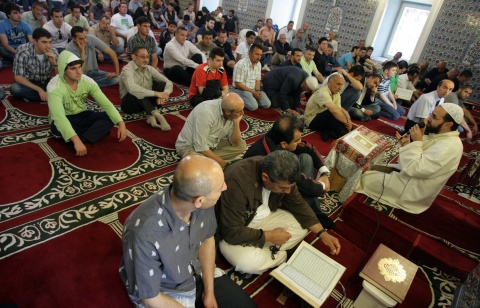 Bulgarian Muslims are pictured praying in the Banya Bashi mosque in downtown Sofia on Friday, May 27, a week after the incident caused by the far-right party Ataka. Photo by BGNES

The claim will be rather symbolic in nature, the emphasis will not be on the potential profit, according to Asan Imamov, legal counselor to the Chief Mufti's Office.

The civil action will most likely be filed in one or two weeks and will seek redress for material and non-material damages.

Last week the nationalist party Ataka, led by Volen Siderov, staged an attack on praying Muslims in front of the Banya Bashi mosque in Sofia. The assault, which shocked Bulgarians with its violence and spurred condemnatory remarks from both ruling party GERB and opposition left- and right-wing parties, came as an Ataka party rally protesting against the use of loudspeakers by the Sofia mosque got out of hand.

"All Muslims are referred to as "terrorists", which we find highly insulting", said Chief Mufti Mustafa Alish Hadzhi, urging a serious approach to the matter to let justice triumph .

Hadji said that the Muslim community harshly condemns the provocations staged on May 20 and called on the Bulgarian people to defy such actions because they encroach the sanctity of the homeland.

Husein Hafazov, Chief Mufti Office's general secretary, commented that the Friday incident has angered Muslims in Bulgaria. In his words, rumors are circulating that the assault may be a sign that a graver violation of Muslims' rights, religion and ethnicity is being prepared.

According to Hafazov, even though the panic is not widespread and all-encompassing, there are people who feel seriously angered and embittered in the aftermath of the xenophobic attack.

Despite that, no protest actions are being organized, he assured, adding that Muslims' anxieties are hardly likely to result in escalated tensions.

Hafazov echoed the opinion expressed in a morning broadcast Friday that such provocations may lead to a radicalization of a part of the Muslims, which could trigger a new "Revival Process", among other things.

At this stage, the Chief Mufti remains positive that there are no radical sentiments among Muslims in Bulgaria.

The Muslim community has welcomed the declaration, adopted Friday in Parliament, condemning the May 20 assault.

The Chief Mufti's Office has reminded that there are around 20-30 000 Muslims in Sofia, while the Banya Bahi mosque can only host 700.

For that reason, a second mosque is needed, for which a project has already been drafted and the land plot has been bought, but the Sofia Municipality has been dragging its feet on the matter for years.