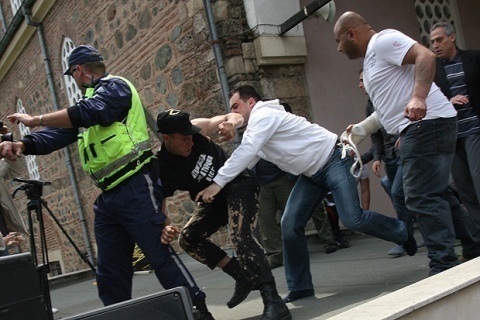 The Bulgarian Parliament accepted a declaration condemning last Friday's attack on praying Muslims in front of a mosque in downtown Sofia by supporters of the nationalist Ataka (Attack) party.

All 127 MPs present at Friday's parliamentary sitting (out of a total of 240) voted in favor of the declaration.

"The Members of Parliament condemn decisively Ataka's aggression on May 20 2011 against the prayers in downtown Sofia. What is most outrageous is that the attack took place on Friday, which is holly for the Muslims, during their Friday prayer...The party's behavior is completely untypical for the Bulgarian nation, for its religious and ethnic tolerance...With its aggressive attempt agains the ethnic peace, jeopardizing Bulgaria's national security, Ataka has become dangerous for the Bulgarian rule," the declaration says.

Meanwhile, Ataka came out with another declaration, warning that paid thugs pretending to be Ataka activists might stage new provocations during Friday's Muslim prayer in Sofia. Volen Siderov, the nationalist party's leader, stated he has never preached violence and those who attacked the Muslims last Friday were, in fact, not Ataka members.

Last Friday, Siderov's party shocked Bulgaria as its rally protesting against the use of loudspeakers by the Banya Bashi mosque in downtown Sofia got out of hand, and what allegedly were far-right activists of Ataka assaulted praying Muslims in front of the mosque.