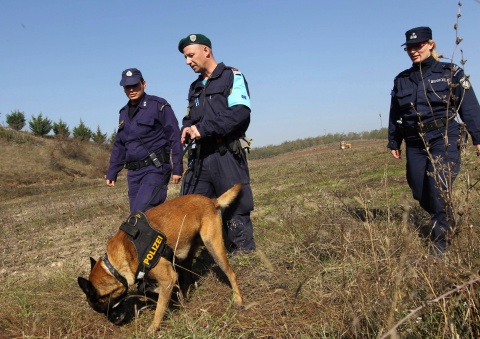 In early March 2011, Frontex made permanent its land operation "Poseidon" to patrol the land border between Greece and Turkey over the huge rise in the number of illegal immigrants which crossed into the EU at that spot in 2010. Simultaneously, Frontex announced the expansion of Operation Poseidon to include the Bulgarian-Turkish land border.

"There are already experts on there ground from Belgium, the Netherlands, Romania, Germany, and Austria working in the Bulgarian Svilengrad border crossing point unit. They are mainly deployed to the Bulgarian border crossing point of Kapitan Andreevo because this is the main point where you detect people trying to use fake ID documents or trying pass hidden inside vehicles," Parzyszek told Novinite.com in an interview.

The Frontex Spokesperson has emphasized that, while many different factors influence the influx of illegal migrants into the EU, Bulgaria's good border control cooperation with Turkey and its investments into border control equipment and the training of border guards provide reasons for optimism that the country can cope with the respective challenges.

"There are quite many factors influencing the influx of migrants. One of them, which is very important, is readmission agreements. In the case of Greece, a readmission agreement with Turkey doesn't truly work; in the case of Bulgaria, the cooperation with Turkey is much better so the Turkish authorities – if they receive proper documentation and justification – they accept people back. This is a very important element – potential migrants know that if they cross the border between Turkey and Bulgaria, there is high probability that they will be sent back to Turkey so they don't choose that way," Parzyszek explained, adding:

"The other factor is that Bulgaria is not fully within the Schengen Area yet, which means that migrants can expect more border checks on the way so they choose Greece... But knowing how much money Bulgaria invested in new border equipment, and knowing how border guards in Bulgaria are trained, I wouldn't worry so much."

According to Frontex data, the flow of illegal migrants into Northeastern Greece remains rather constant – 70 to 100 persons a day are detected and apprehended at the Greek-Turkish land border at a section where the Maritsa River, known in Greece as Evros, is shallow enough to allow crossing. The situation has changed from September 2010 when the crossings occurred closer to Orestiada; they are now further south in the direction of the city of Alexandroupolis.

Regarding the situation in Southern Italy, which saw a dramatic increase in the numbers of illegal migrants from North Africa since January 2011 as civil unrest and revolutions occurred in Egypt, Tunisia, and Libya, the Frontex Spokesperson said that since the start of Frontex's  Operation Hermes on February 20, 2011, there have been almost 31 000 people that arrived to the Italian island of Lampedusa.

Parzyszek stressed that Frontex is providing Italy mainly with risk-analysis experts, and that the Italian authorities are really well-equipped to cope with the situation. He pointed out that the numbers of illegal migrants detected in the waters around Southern Italy vary substantially.

Frontex data shows that in 2010 Greece had over 86% of the illegal border crossings into the EU, or some 90 000 people. Spain was No. 2 on the list with about 5 200, followed by Italy with some 4 500. In 2011, however, Italy is expected to be the most affected EU external border country from illegal migration.

Meanwhile, the external EU border in Central and Eastern Europe does not see high numbers of illegal crossings, largely thanks to the very strong border control in EU's eastern neighbors such as Russia and Belarus.

Frontex Spokesperson Michal Parzyszek has stressed, however, that illegal immigrants getting into the EU via international airports pose a bigger problem that the illegal crossings of the external borders of the Union.

"The biggest issue is actually invisible. This is something that is always omitted: the international airports. The majority of the people that are apprehended within the Schengen Area that are staying illegally actually come in legally by plane, and then overstay their visas.  In terms of people staying illegally on the territory of the European Union, this is for sure the biggest issue. No one really has numbers how many people are overstaying their visas but their numbers are certainly much higher than the number of illegal immigrants detected at sea or land borders. This is absolute number one concern," Parzyszek explained.

In his words, the EU member states are expected to agree on new regulations that will expand the responsibilities of Frontex, which will most likely be adopted over the summer.