US Embassy in Sofia Downplays Information from Wikileaks Cables 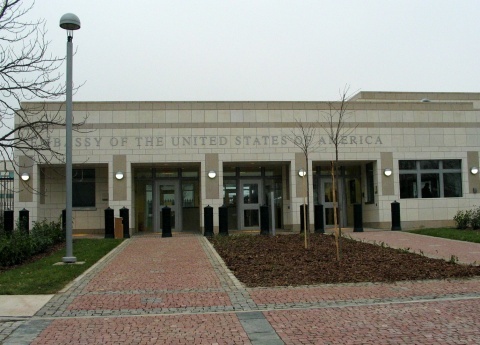 The building of the American Embassy in the Bulgarian capital Sofia. File photo

"While we cannot comment on the content of alleged classified materials which may have been leaked, we would like to underscore that the U.S. and Bulgaria share an excellent relationship and that our high level of bilateral cooperation speaks for itself."

This is pointed out in an official statement from the US Embassy in Sofia, sent to the media Thursday in connection with the latest diplomatic cables, released by the whistle-blowing site Wikileaks.

"It is important to keep in mind that diplomatic cables are often preliminary and incomplete analyses of international affairs, and should not be seen as official representations of U.S. foreign policy," the statement points out.

"The relationship that the U.S. has with Bulgaria is based on mutual respect, shared goals, and common values.  We look forward to continuing to build this relationship based on many issues of mutual interest, with a special focus given to our strong operational cooperation in the area of law enforcement, which includes narcotics interdiction. Our bilateral relationship and cooperation have never been stronger," the Embassy concludes.

The cable in question was released late Wednesday evening by the project for investigative journalism – bivol.bg, official partner of Wikilekas.

It is dated May 9, 2005. In it, former US Ambassador to Sofia, John Beyrley, paints a portrait of now Prime Minister, Boyko Borisov and his raise to political stardom.