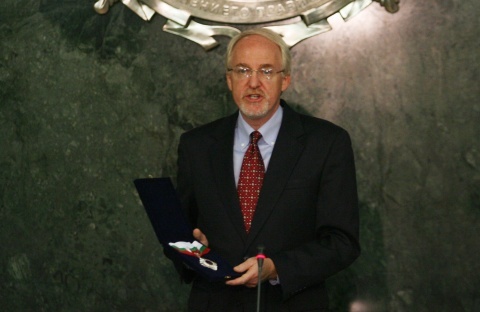 Bulgarian Prime Minister and former Sofia Mayor Boyko Borisov has been described as a promising politician with murky ties by former US Ambassador to Bulgaria John Beyrle in a US diplomatic cable released on WikiLeaks.

In the cable, dated May 9, 2005, former US Ambassador to Sofia, John Beyrle, paints a portrait of Borisov and his rise to political stardom; the cable was released by bivol.bg, partner of the notorious whistle-blowing site Wikilekas.

"Boiko Borisov is an unpredictable individual with unbridled political ambition and an apparently bright future in Bulgarian politics," the American diplomat writes. The cable offers a summary of Borisov's career, his contacts, personal characteristics, public and secret ties, and his attitude towards the US. Beyrle also notes that in the past "Borisov has been implicated in serious criminal activity and maintains close ties to LuKoil and the Russian embassy."

The Ambassador pays special attention to the relationship between the then Mayor of Sofia, Borisov and the CEO of Lukoil Bulgaria, Valentin Zlatev, pointing out "Borisov has close financial and political ties to LUKoil Bulgaria Director Valentin Zlatev, a vastly influential kingmaker and behind-the-scenes power broker. Borisov's loyalty (and vulnerability) to Zlatev play a major role in his political decision making." As proof, Beyrley talks about favors the two often exchange.

In addition, the cable titled: BULGARIA'S MOST POPULAR POLITICIAN: GREAT HOPES, MURKY TIES, notes that "Borisov's ego may provide our (US) greatest leverage over him -- he craves international attention and particularly covets US approval," and portraits the Mayor of Sofia as "street smart but often appearing politically naive," with "high energy level and short attention span that sometimes lead him to pace like a caged tiger," and as being "exceptionally thin-skinned when it comes to public or private criticism."

The cable is divided in several sections with the summary focusing on the Citizens for European Development of Bulgaria, GERB, movement, quickly becoming the most popular political organization in the country and its "meteoric rise," which became the grounds for the said report.

The Ambassador focuses on Borisov's stated support for close partnership with the US, including for joint military bases on Bulgarian soil.

The section dedicated to the PM bio is titled: From Fireman to "Batman" while the one talking about accusations of past ties with organized crime, including scandals with illegal draining of fuel, methamphetamines traffic and dependency on Lukoil is called The Dirt.

"We must continue to walk a fine line between being used by Borisov's publicity machine and alienating an exceptionally popular and seemingly pro-American politician who may emerge as Bulgaria's next leader. In other words, we should continue to push him in the right direction, but never forget who we're dealing with," Beyrle concludes.

The report's confidentiality level is listed as SECRET/NOT FOR FOREIGNERS, only one level below the highest TOP SECRET – cables classified as TOP SECRET are not available to Wikileaks, Bivol points out.

The cable has another characteristic – from a total of 978 reports sent from Sofia, there are just a few that have been checked and approved simultaneously by the Embassy's political, military and security advisors, not just Ambassador Beyrle, again according to Bivol.

In the cable, Beyrle also mentions information obtained by a mysterious SIMO. A check of the Wikileaks site, on Bivol's request, where about 13000 cables have been published so far, found only 4 mentions of SIMO. According to the context, SIMO appears to be an agency related to the security and information domains, participating in the Legal Enforcement Commettee of the Ambassador, together with other known US agencies such as DEA, Bivol writes.

Full text of the cable read HERE and HERE.