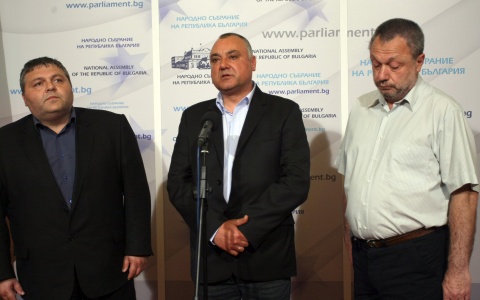 Three MPs from the controversial Bulgarian far-right Ataka (Attack) party have left its parliamentary group, leaving it with just 17 deputies.

Valentin Nikolov, Kiril Gumnerov and Ognyan Peychev are yet to share the motives for their move. The defection came after an accident Friday, in which Ataka supporters physically assaulted praying Muslims in front of a mosque in downtown Sofia.

He did not exclude the possibility of early general elections in the autumn, to be held together with the local and presidential vote, but denied allegations that this is a deliberately pursued plot.

Borisov once again reproached the political parties – the conservative RZS, the right-wing Blue Coalition and the nationalist Ataka - for pledging support for his minority government only to withdraw it later.

The Prime Minister's GERB  has 117 of a total of 240 seats in Bulgaria's unicameral parliament and has so far ruled with the support of 20 deputies from Ataka.

In December 2010 Kamen Petkov became the first member to leave Ataka's parliamentary group, citing disagreements with the policy of the leadership, which he has described as "spineless support for the government".