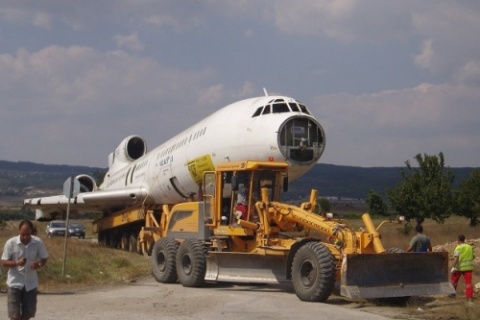 The plane of communist dictator, Todor Zhivkov, is now under the waters of the Black Sea. Photo by DarikNews

The plane used by Bulgaria's former communist dictator, Todor Zhivkov, was sunk in the waters of the Black Sea Wednesday at 10:44 am.

The craft is now 23 meters under the water surface about 2-3 miles away from the St.St. Konstantin and Elena resort near the Black Sea capital Varna.

In September, 2009, a special platform moved the 40-ton TU-154 airplane, without its wings, towards the Varna Lake and it was later transported by a barge to the Varna shipyard where the body of the craft was cleaned and all systems and cables removed.

The craft arrived at the Varna port on Monday.

With time, the 11-meter tall and 48-meter long plane will become an artificial reef and refuge for many sea species. Its remains will turn both into tourist attraction and practice diving ground. The access to the plane will be free of charge.

The former government TU-154 was manufactured in 1971 and made its last flight on September 16, 1999, between Varna and the capital Sofia.

The former trawler "Pioneer," also used by Zhivkov, was sunk with the same purpose in the summer of 2008 near the town of Sozopol on Bulgaria's southern Black Sea Coast.