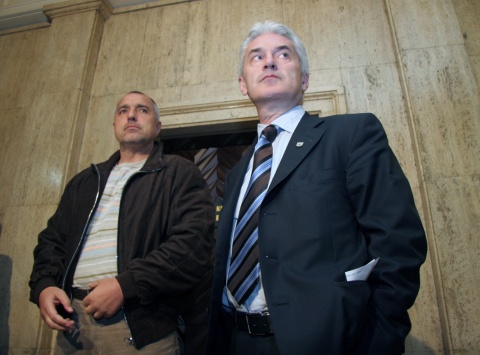 Bulgaria's far-right and nationalist party Ataka is getting ready to stage a new protest rally during the Friday prayer at the Sofia Mosque Banya Bashi.

According to unconfirmed reports, Ataka, whose activists shocked Bulgaria by assaulting praying Muslims in the Sofia mosque last Friday during a rally protesting against the loudspeakers of the mosque, are getting ready for a new rally just a week later.

The Ataka party has not confirmed the reports. However, there are indications that the Sofia Municipality and Sofia Mayor Yordanka Fandakova, a representative of the ruling party GERB, who can technically ban the provocative rally, will adopt a hands-off policy.

The reason for that is that by banning the rally of the nationalist party Ataka, which is the only ally, though an informal one, of the ruling center-right party GERB, the Sofia Municipality might lead Ataka leader Volen Siderov to withdraw support from the minority government of Prime Minister Boyko Borisov.

GERB has 117 MPs out of 240, and Ataka's 21 MPs provide it with a comfortable majority, after the rightist Blue Coalition with its 14 MPs declared itself to be in opposition. One of the reason Borisov did not make a formal coalition with Ataka, in addition to his widely proclaim desire not to be dependent on coalition partners, is the protest of the European People's Party, of which GERB is a member.

Siderov has threatened Borisov he will stop backing the government unless the authorities took measures to investigate what he claims to be a "nest of radical Islamism" in the Sofia mosque.

Borisov himself and his party GERB initially denounced the actions of their ally; however, Borisov subsequently sought to downplay Friday's incident, saying that the nationalist party Ataka and the ethnic Turkish party DPS (Movement for Rights and Freedoms) are both going down the same road by seeking to pump up their electoral support through incidents with propaganda effect.

If the government collapses, this would mean early elections prepared by a caretaker Cabinet to be appointed by President Georgi Parvanov, a Socialist and major rival of PM Borisov.

Informal reports indicate that while Borisov's party is considering causing early elections, they want to avoid holding a vote on the terms of a caretaker Cabinet appointed by Parvanov, whose term expires in January 2012. Bulgaria is holding presidential and local elections in the fall of 2011, most likely in October.