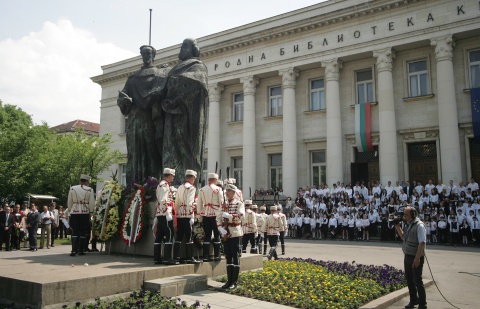 Thousands took part in the procession for May 24 in Sofia, and at the tribute ceremony at the monument of St. Cyril and St. Methodius before the Bulgarian National Library. Photo by BGNES

Bulgarians from around the country and the world paid tribute Tuesday, May 24, to the deed of Saint Cyril and Saint Methodius, the creators of the Cyrillic alphabet.

In Sofia, in the presence of President Georgi Parvanov, cabinet ministers, lawmakers, governors, academics and numerous guests, a solemn manifestation strolled from the National Palace of Culture to the monument of the two brothers in the square in front of the National Library.

The brothers were born in Thessalonica, in 827 and 826 respectively. Both were outstanding scholars, theologians, and linguists.

Several centuries later, Patriarch Evtimii launched a literary reform and updated the alphabet, assuming that words are expression of the divine essence of things.

You can READ HERE the hymn of St. Cyril and St. Methodius