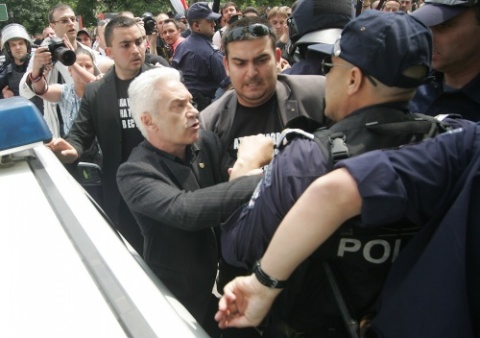 "There was indeed a strong confrontation between us, but not physical. We exchanged some harsh phrases and that was it, mostly. I would in no way say we engaged in a fight," Siderov claimed, as cited by the Dnevnik daily.

"I told him to apologize to (Ataka MP) Denitsa Gadzheva, who was hit on the head by a stone thrown by a Muslim," Siderov further said.

Earlier Sunday, Velichko Konakchiev, the anchor of a popular Bulgarian radio broadcast was forced to interrupt it afterSiderov and Ismailov allegedly went for a fight while on air.

In Konakchiev's  words, Siderov turned on Ismailov, Member of Parliament, who was recently expelled from the ethnic Turkish Movement for Rights and Freedoms for his opposition to the leader Ahmed Dogan. The nationalist was infuriated by criticism over the recent clashes between members of his nationalist party and Muslims in front of the central mosque in Sofia.

On Friday far-right extremists from the Ataka party assaulted praying Muslims. The outburst occurred while the nationalists led by their leader Volen Siderov staged a rally near the Banya Bashi mosque in Sofia protesting against the use of loudspeakers by the mosque. Several people ended up injurfed, including Denitsa Gadzheva, an Ataka MP, who was presumably hit by a stone thrown by a Muslim.

"The physical clash was provoked by Volen Siderov, there is no point in beating about the bush or lying," the anchor clarified Sunday." "I have never seen such a circus in this studio for the last twenty-one years," he said.