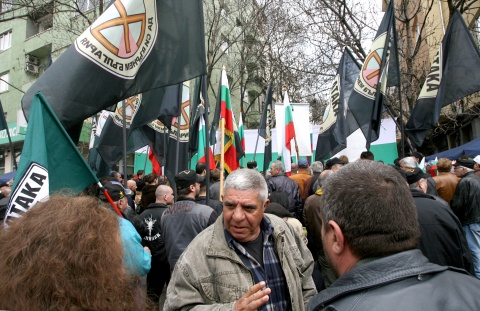 Members and followers of Bulgaria's far-right, nationalist Ataka party marred Tuesday the ceremony dedicated to the martyrs of the Batak massacre.

The Town Hall complained about a dozen or more of individuals bursting inside their building and insulting the municipal employees because they failed to issue a permit to Ataka to hold their own meeting.

About 200 Ataka followers, including party leader, Volen Siderov, gathered in Batak Tuesday for the events marking Bulgaria's first ever homage to the victims as saints.

The police in the city of Pazardzhik inform the situation is now under control.

The party's press center announced in a short, but timely press release, the nationalists held a meeting in Batak to honor "Bulgarian victims of Turkish genocide," adding there had been a "small incident" with the Town Hall because the mayor and two of his deputies attempted to sabotage their event.

The police say their interference had prevented a violation of the public order at the central town square where the official ceremony was held.

The Regional Police Directorate further informs they have issued a permit to Ataka, but for 6 pm, not 1 pm when the nationalists attempted to hold their march.

"The Ataka members were very arrogant, saying no one can stop them," eyewitnesses told the news site Dnes.bg.

The nationalists held their meeting after all, while the performers were forced to wait for the end of their speeches to have their concert.

Bulgarian is marking on May 16 and 17 the Batack martyrs as saints for the first time after the Holy Synod made the decision to canonize the Batak martyrs in April, 2011.

In April 1876, Bulgarian freedom fighters rebelled against the authorities of the Ottoman Turkish Empire seeking to liberate their nation and create an independent nation state.

The so called April Uprising was crushed with great violence by Ottoman forces, when an estimated 30 000 Bulgarians, mostly civilians including women, children, and elderly, were slaughtered. Coverage in the European press led to an international outrage and a humanitarian intervention in the Russo-Turkish War of 1877-78.

Between 4000 and 5000 Bulgarians were butchered in the Batak Massacre – in the southern town of Batak – described by journalist MacGahan in a shocking account, while some 700 were slaughtered in the region of Novo Selo, Kravenik, Batoshevo, and Apriltsi – villages in Northern Bulgaria near Lovech.