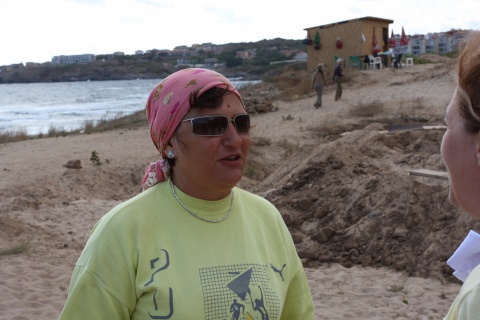 Professor Krastina Panayotova pictured during excavations near Sozopol in 2008. Photo by BGNES

A temple of Ancient Greek goddess Demeter and her daughter Persephone has been discovered by a team of Bulgarian archaeologists near the town of Sozopol on the Black Sea.

The archaeological team of Prof. Krastina Panayotova found the Ancient Greek temple Tuesday during excavations on the Skamniy Cape where the archaeologists are exploring a fortress wall and a church that were part of a Byzantine imperial monastery.

Panayotova explained that the figurines and ceramics found in a concentrated spot are clear evidence of the cult for Demeter and Persephone.

"We have come across pieces before but this time the finding is concentrated in one location, in the wall of the tower that was built above it. It is connected with the cult for Demeter and Persephone. As there is a church here, we naturally expected a sanctuary from the Antiquity period," the archaeologist explained as cited by Focus.

The sanctuary is near the monastery complex "St. Apostles and 20 000 Martyrs" built in the first half of the 14th century by Anastasios Palaiologos, brother of the Byzantine Emperor.

Sozopol, whose name as an Ancient Greek colony was Apollonia, was a traditional Byzantine stronghold during the Middle Ages even though its hinterland was in Bulgarian hands. The town itself was conquered by the First Bulgarian Empire under Khan Krum in 812 AD but was later recaptured by Byzantium.

Sozopol was conquered by the Ottoman Turkish Empire only in 1459, six years after the fall of Constantinople; Bulgarian archaeologists have found evidence that the monastery "St. Apostles and 20 000 Martyrs" was set on fire and the town was ravaged during the invasion.

Sozopol appears to be one of the earliest centers of Christiniaty as in 2010 Bulgarian archaeologist Kazimir Popkonstantinov found relics of St. John the Baptist on the St. Ivan island near the town.