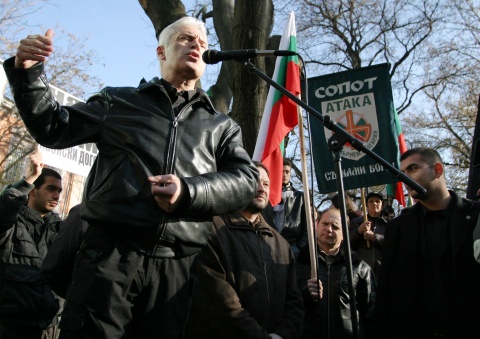 Diplomatic cables of the US embassy in Sofia have been revealed on WikiLeaks and provided to the project for investigative journalism www.bivol.bg, bringing out new details about the way Bulgaria's far-right, nationalist Ataka party and its leader, Volen Siderov, are viewed by American diplomats.

The first available cable on the subject has been sent on July 12, 2005, by then US Ambassador to Sofia, James Pardew, after it became known Ataka had secured seats in the Parliament as result of the general elections. In the cable, titled BULGARIA: EXTREME NATIONALIST PARTY ENTERS PARLIAMENT, the diplomat writes about the policies of Ataka and Siderov, seen by him as xenophobic and anti-semitic, points out Ataka's parliamentary group includes a significant number of former military and police officials, gives a summary of Siderov's biography and work as journalist, talks about other key figures in the party and and notes undisclosed sources have informed him the nationalists might have received funding from Overgaz Chief Sasho Donchev and Nove Holding owner Vassil Bozhkov aka The Scull.

In a cable, dated October 17, 2005, titled PROGRESS ON U.S. MILITARY ACCESS, BUT TOUGH ISSUES REMAIN, the then Charge d'Affaires of the US Embassy Jeffrey D. Levine points out the nationalists lead an anti-American campaign regarding US military bases.

"The leader of the extreme nationalist Ataka party, Volen Siderov, took the opportunity to grandstand, saying that the U.S. military presence would expose Bulgaria to attack and calling for a referendum on the proposed agreements."

"Some of our Bulgarian contacts have suggested that the Russian Embassy in Sofia may be encouraging Ataka and influencing press coverage of the issue. The ground for such measures is undeniably fertile; a tracking poll commissioned by the Embassy in September showed that 61 percent of Bulgarians oppose "U.S. bases" on their territory," Levine writes.

The next diplomat to talk in most detail about Ataka is former Ambassador, John Beyrle. In a cable, sent on December 9, 2005, titled BULGARIA'S "ATAKA" PARTY BECOMING INCREASINGLY ANTI- AMERICAN, the diplomat writes that "the rhetoric of the extreme nationalist party Ataka has become increasingly anti-American, with much of the party's wrath focused on proposed joint military facilities and Bulgaria's participation in the Iraq coalition."

The Ambassador notes the recently-launched "Ataka" daily with its slick format, professional editing and provocative anti- American headlines provides a larger platform for its extremist views and that the nationalists anti-American stance puts pressure on the Socialists, whose core electorate often shares similar views on foreign policy.

After giving an overview of Ataka's arrival on the Bulgarian political horizon, the elections and the following defections and splits inside the party, and calling Siderov's rhetoric laud and "much a do about nothing," Beyrle concludes that despite all this the party remains stable.

A special paragraph is dedicated to Siderov's ties with the Russian Embassy in Sofia:

"Russian diplomats reportedly noted the fact that "Ataka is the only party in Bulgaria's parliament that envisaged new policies with regard to relations with Russia," the diplomat points out.

"The Embassy maintains a no-contact policy with Siderov and other Ataka representatives, and have encouraged Bulgarian leaders to speak out against the party's xenophobic message. Believing that direct Embassy confrontation with Ataka will amplify their message, we have concentrated on correcting their misinformation and encouraging others to question their financial backers," Beyrle concludes.

In cable, dated December 30, 2005, Levine once again focuses on the issue with the US military bases in Bulgaria and the influence of Ataka.

"The extreme nationalist Ataka party, with suspected Russian advice and assistance, has negatively influenced press coverage of the negotiations, but its calls for a referendum have failed to gain traction. Given the relative dearth of anti-American sentiment in Bulgaria, we believe the best antidote to public skepticism is the rapid conclusion of an agreement," the diplomat notes.