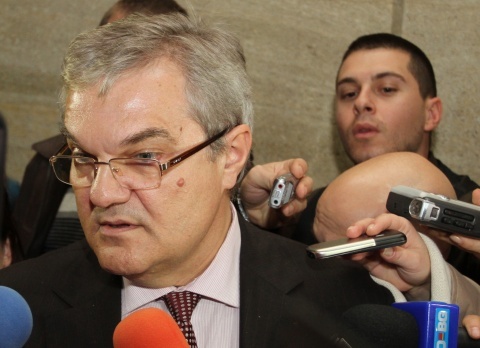 Bulgaria's former Interior Minister and current BSP MP, Rumen Petkov, has been lashing at the US Ambassador to Sofia for months now, accusing him of telling compromising lies. Photo by BGNES

The US Ambassador to Sofia, James Warlick, is going to be recalled from Bulgaria in just days, former Bulgarian Interior Minister, Rumen Petkov, declared.

In an interview for the private TV channel bTV, Petkov, who is currently a Member of the Parliament from the opposition Bulgarian Socialist Party (BSP), called the Ambassador "trash, liar, and drug addict," fueling further the long-running battle between the two.

In the past months, Petkov and Warlick have engaged in a furious war of words that flared after the US envoy alleged the Socialist's visa was withdrawn on grounds of an investigation carried out against him, but refused to specify the details.

"He is leaving. There is no way the US are going to keep such trash here any longer," the MP said, adding the diplomat is going to be recalled on the grounds he would be given the task to look for Americans to invest in Bulgaria.

One of the real reasons, however, would be "Warlick's frequent visits of Sofia's locales in the company of Bulgarian beauties," according to Petkov, who asked how the Ambassador has so much money to waste in restaurants.

"Diplomacy only has a certain threshold of tolerance," the former Interior Minister declared.

Petkov's accusations came on the heels of statements of the leader of the far-right, nationalist Ataka party, Volen Siderov that Warlick has threatened him.

On Friday, in the Parliament, Siderov demanded to be provided security, claiming that during a chance encounter in a Sofia restaurant, the US Ambassador had vowed to destroy him after Siderov approached the diplomat with a request to the US to pay USD 2 B for the joint military bases in the country.

The clash was photographed by an Ataka reporter and the published picture shows the Ambassador in female company.

Regarding the recalled visa, Petkov reiterated the diplomat is a liar for saying the former Minister is under investigation.

The MP also repeated his previous appeals to Warlick to publically say if he had ever used illegal drugs, insisting he has information the latter is a drug addict on the grounds he had been trying to persuade "Bulgarian citizens" in the benefits of making "soft drugs" legal.

"But this is not California," Petkov pointed out.

The former Minister agreed his accusations are too strong, but explained them with the need "to realize who those attempting to solve the country's problems really are."

"If we allow liars and junkies to interfere with our internal affairs, this is very bad for the country and its politics. And Warlick interferes in a very bold way. He goes in and out of the Ministry of Economy as it is his own property. And he demands to see the contracts we have with the Russians before they are made public,"Petkov explained.

Regarding recently released Wikileaks information he had supported a contract with the Court, on the request of Chief Prosecutor, Boris Velchev, who wanted speedy trials against high-profile criminals regardless of the evidence, the MP said former US Ambassador, John Beyrle, was not a person to be trusted much either.

"During his last days here, Beyrle attempted to stir a dishonest intrigue between myself and another factor, and I instantly crushed it," the former Minister stated, but declined offering any details. He, however, denied ever saying any of the things the Ambassador has written in the secret diplomatic cables.

On the subject of the upcoming fall local and presidential elections, Petkov pointed out if Prime Minister, Boyko Borisov, decides not to run for President, then BSP will be the winner.

The MP further declared the nomination of Interior Minister, Tsvetan Tsvetanov, would be a disaster.

As far as the BSP own nominations, the former Minister mentioned the names of MPs Petar Korumbashev and Meglena Plugchieva (ex EU Funds Minister) and the Mayor of the western city of Kyustendil, Kostadin Paskalev.