Strauss-Kahn's Wife: I Have No Doubts About Dominique! 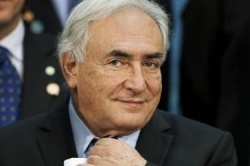 I have no doubts my husband is innocent, stated Dominique Strauss-Kahn's wife Anne Sinclair in a special statement after her husband's arrest.

The IMF president was arrested in New York and charged with sexually assaulting a maid in the hotel he was staying.

In her statement, Sinclair, a famous French journalist, asked everybody for impartiality and restraint when commenting on the incident.

Her husband is alleged to have exited his hotel bath naked and impressed himself upon the maid, who had just come to clean his room at the Sofitel.

After the incident, Strauss-Kahn left for the JFK airport, where he was detained upon a signal by the attacked woman.

His lawyer has already stated his client will plead innocent. Dominique Strauss-Kahn, 62, is a leading Socialist politician from France, who was expected to run against incumbent Nicholas Sarkozy in 2012.

His professional background is in economics and law. He has served as Finance Minister of France and since 2007 - as the managing director of the International Monetary Fund.

A source from the French Socialist Party stated this is a case of a well-staged campaign to discredit Strauss-Kahn.