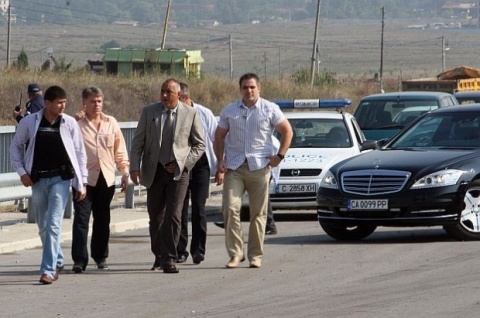 Present at the ceremony was also Bulgarian Minister of Infrastructure Rosen Plevneliev and EC DG Regional Development director Dirk Ahner, who said he was "greatly optimistic" about the developments he is witnessing in Bulgaria.

The 19-km highway connects the western arc of the Sofia beltway to the E-79, bypassing the Lyulin mountain from the west.

It thus disburdens heavy traffic from the narrow road passing through Knyazhevo and Vladaya south of Sofia. It is the first fully completed highway in Bulgaria.

PM Borisov assured that the government will take all measures to indemnify owners and villages that were expropriated for the construction, as well as to repair local infrastructure.

Bulgaria will continue building and finishing highways, with Trakiya Highway to be ready in 2012, and Maritsa in 2013, promised Regional Development Rosen Plevneliev.

The infrastructure Minister commented that the construction of the Trakiya Highway, set to connect Sofia to Burgas on the Black Sea, is going completely as scheduled and it is certain to be finished by June 2012.

Maritsa, set to connect Trakiya Highway to the Turkish border near Svilengrad, is set to be ready sometime in 2013.

"Bulgaria needs 7 highways. We now have the first of them ready," said Plevneliev, referring to Lyulin, a mere 19-km stretch of road.

Over the end of 2010, Bulgaria's center-right GERB cabinet led by PM Boyko Borisov turned the development of infrastructure into one of its very top priorities.

After the opening ceremony of the Lyulin Highway, the Bulgarian PM and ministers took EC Regional Development director Dirk Ahner to the Danube city of Vidin by helicopter showing to him along the way both the road infrastructure of Northwestern Bulgarian, the poorest EU region, and the progress of the construction of the second Danube bridge.

"Our ambition is to connect Vidin to the warm waters of Thessaloniki," said the Bulgarian PM. When finished, Danube Bridge 2 will make easier the connection from Central Europe through western Bulgaria and on to Greece.

Borisov also stressed the level of help Bulgaria has been getting from the European Commission and expressed hopes that the cooperation will continue on.

Danube Bridge 2 is set to be completed by October 2012. The Prime Minister made it clear the Bulgarian government will seek EU funding for the construction of a highway-like road connecting Sofia and Vidin, an extension of the Lyulin and Struma highways so as to boost the so called Pan-European Transport Corridor No. 4 – which connects Greece with Central Europe via Western Bulgaria, including Blagoevgrad, Pernik, Sofia, and Vidin.