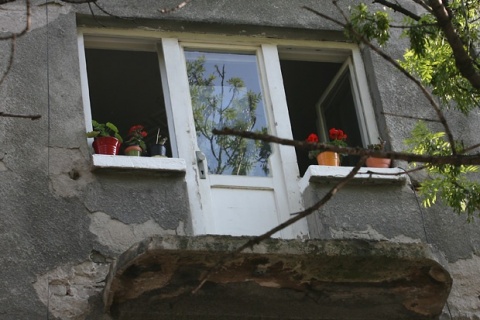 The fatal balcony in the heart of Sofia, with its rail now missing. Photo by Sofia Photo Agency.

One of the two young women who fell from the third floor when their balcony railing gave in has sustained very severe injuries and is in a life-threatening condition.

The incident, which happened around 4 am Sunday, causing the death of a third person - a man in his twenties of reported Czech citizenship.

One of the girls, aged 19, has suffered a heavily broken ribcage as a result of the fall, and had surgery performed, with her condition remaining critical.

The other woman has a broken pelvis, as well as injuries to her arms and legs, but her condition is not critical.

At first inspection, it is reported that the balcony railing had fallen as a result of the pressure of people leaning on it.

The building, located in the very heart of Sofia at the intersection of Vitosha Blvd and Neofit Rilski Str, is old and does not appear to be well maintained.

On the other hand, records have shown that no inspections of have blacklisted it as dangerous.