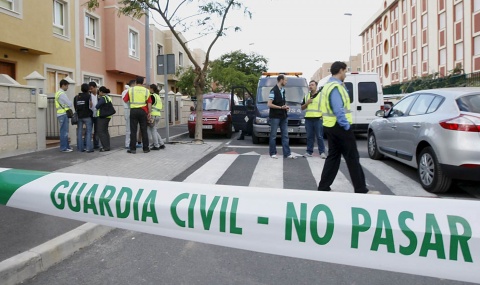 A Bulgarian man shocked Tenerife by attacking and beheading a woman in public. Photo by EFE

Spanish resort island of Tenerife is in shock after a suspect, believed to be a homeless Bulgarian man with a criminal and mental illness record, beheaded a woman in a supermarket.

The victim of the horrifying attack is a 62-year-old British woman, according to the BBC.

The Bulgarian man is reported to have attacked the woman in a retail center in Los Cristianos, Tenerife, on the Canary islands, Friday morning.

In what seemed like a Hollywood horror movie plot, he cut off her head with a machete, a knife, or even a sword, according to some reports, and started running with the head in his heads before he was wrestled down to the ground by security guards and passers-by but not before he was seen by dozens of people dropping the blood-soaked head in his hands.

Witnesses have told local media that they thought the man was carrying an artificial head.

Regional Interior Ministry delegate Dominica Fernandez said the suspect is believed to have entered the shop, stolen a knife which he then used to assault and behead the woman.

It is still unknown what caused the Bulgarian man to commit the brutal murder in public, and if he is in any way related to the victim of the seemingly random attack; according to some reports, he had been following the victim for several days before assaulting her.

According to Spanish newspaper El Mundo, the Bulgarian man was born in 1983; he had a mental illness record, and was released from a psychiatric hospital in February 2011, after he was admitted there for a series of random violent incidents such as punching a random passer-by in the street.