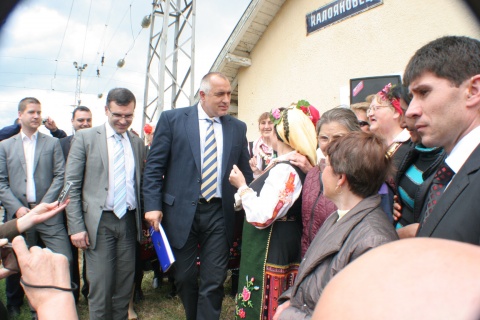 Bulgarian Prime Minister Boyko Borisov (middle) with Finance Minister Djankov (left) gave the start of the rehabilitation of the Plovdiv-Burgas railway in the village of Kaloyanovets Wednesday. Photo by BGNES

The Bulgarian government has formally started the project for the rehabilitation of the southern rail highway between Plovdiv and Burgas, a major and long-anticipated infrastructure project.

He praised it as a way to provide a "fast and modern" railway that will boost not only the regional but the national economy.

"I have always said that traffic brings money, investments, and additional business activities, and thus creates many jobs. This project is creating 600 new jobs. People here have been waiting the start of this project for 20 years," Borisov said, as cited by BTA.

The planned total investment in the Plovdiv-Burgas railway is over BGN 216 M; the rail line will be brought in line with all EU requirements – which few of the Bulgarian railway routes meet as of yet.

The rehabilitation will allow trains to travel at 160 km/h between Plovdiv and Burgas instead of 100 km/h at present, Bulgarian Transport Minister Alexander Tsvetkov explained. This will reduce the travel time by 70 minutes, which is about 4.5 hours at present.