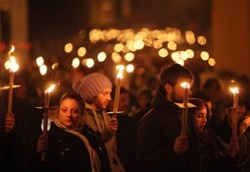 People take part in a torchlight procession for earthquake victims in L`Aquila, Italy, 05 April 2010, on the eve of the first anniversary of the devastating earthquake that hit the region on 06 April 2009.

Thousands of Italians flee from Rome over predictions of a giant earthquake on May 11, 2011.

The panic has been triggered by rumors that self-taught seismologist Rafael Bendandi, who died in 1979, predicted a devastating earthquake would hit the city on May 11, 2011.

Experts are positive that earthquakes can not be predicted and some even question the authenticity of Bendandi's sayings. The Bendandi foundation announced that no such predictions were to be found in the writings of the scholar.

Despite that, a large number of Rome citizens decided to leave the city for at least 24 hours for reasons of security.

According to Italian media, the number of Rome-based workers on leave went up by 18% for the day, while 20 000 students refused to go to school.

Bendandi is famous for his accurate predictions. In 1923, he predicted an earthquake that took the lives of one thousand people, although he got the date wrong by two days.

Bendandi made his calculations on the basis of the movements of the planets, the moon and the sun.

In 1927, the scholar was given a knighthood by Fascist dictator Benito Mussolini.

Rumors claim that, little before he died, the seismologist predicted the earthquake on May 11, 2011, together with two disasters that would put the whole of Italy in danger in 2012.