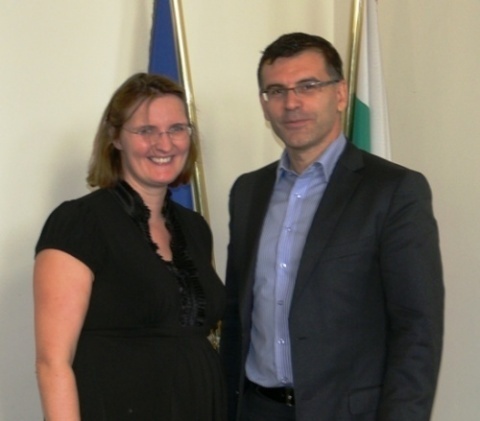 During its Sofia visit in October last year the IMF mission was headed for the first time by Ms. Catriona Purfield, who is pictured here together with Bulgaria's Finance Minister Simeon Djankov. Photo by Bulgara's Finance Ministry

A mission of the International Monetary Fund will visit Bulgaria's capital Sofia during the period May 10-20 to hold regular bilateral discussions on economic policies with the Bulgarian authorities.

This is part of the IMF's surveillance under Article IV of the IMF's Articles of Agreement. The mission will be headed by Mrs. Catriona Purfield.

"The mission will meet with officials from the Ministry of Finance, the Bulgarian National Bank, other government agencies, as well as representatives from the private sector, including banks and industry, unions, and non-government organizations," IMF's Regional Resident Representative in Bulgaria and Romania, Tonny Lybek, said.

The mission will disseminate its conclusions at the end of the mission.

Bulgaria's economy will grow 3% in 2011, according to the biennial World Economic Outlook report released by the International Monetary Fund earlier in April.

The IMF forecast for the Bulgarian economy in 2011 is below the 3.6% growth projected by the Bulgarian government in its 2011 budget.

The Fund has actually upgraded its 2011 economic growth project for Bulgaria, which used to be at 2.6%. IMF data also shows that in 2010 the Bulgarian economy grew by 0.2%.

Just recently, Bulgaria's Finance Ministry reduced its economic growth forecasts for 2012 and 2013 in light of the civil unrest in the Arab world and the aftermath of the devastating earthquake that hit Japan on March 11. Thus, the Cabinet in Sofia now expects Bulgaria's economy grow by 4.1% in 2012 instead of the original figure of 4.7%; in 2013, the growth is forecast to be 4% instead of the 4.9% previously expected.